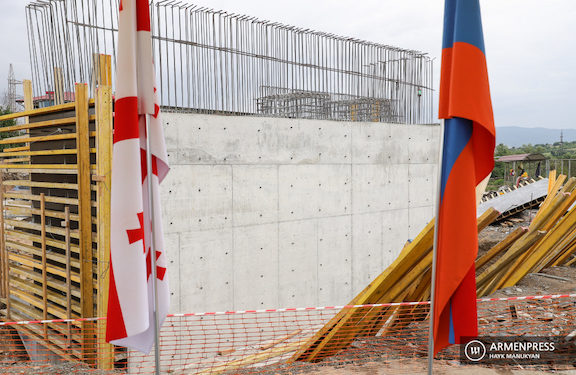 The construction of a new bridge linking Armenia and Georgia over the Debed River near the Sadakhlo-Bagratashen border checkpoint kicked off on Friday.

The almost 525-foot bridge will have a two way road with the Debed River passes underneath the bridge. The construction is estimate to cost will cost 7,300,000 euros ($8.7 million) and is expected to be completed in May 2022.

The project is funded by the European Bank for Reconstruction and Development, the governments of Armenia and Georgia.

Georgia’s Minister of Regional Development and Infrastructure Irakli Karseladze called the construction of the new bridge as another symbol of Armenia-Georgia alliance.

“We have a tradition. We build bridges together and call those bridges friendship bridges. We have named this 200-meter long bridge ‘Friendship Bridge,’ which will open next year. This is the best project in terms of infrastructure, which proves how friendly the Armenian and Georgian people are,” Karseladze told reporters during the ceremony.

He explained that the bridge is the first joint project, adding that there are grounds for discussing new joint programs.

Armenia’s caretaker Minister of Territorial Administration and Infrastructure Suren Papikyan said that the construction of the bridge has been in discussion since 2012, the loan agreement was signed in 2017, but the construction did not begin for various reasons.

“As a result of our joint efforts we managed to reach to the point that this project kicked off. Armenia’s north, roads not only with Georgia, but also with other countries, including our main partner Russia pass through this bridge. Of course, we have other checkpoints, but this is the most intensively operated route because the road leading to Lars passes through this area,” Papikyan explained.