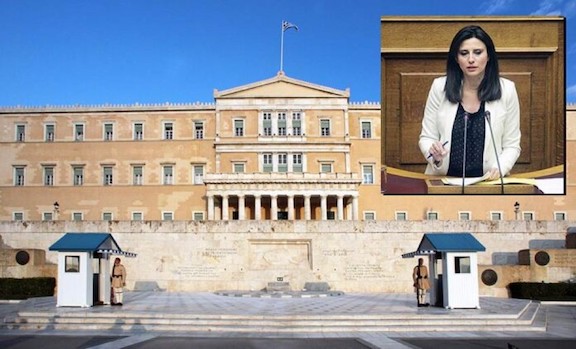 At the initiative of the Armenian National Committee of Greece, the country’s foreign minister has been summoned to parliament to provide an explanation about why Greece’s Ambassador to Azerbaijan attended a junket to occupied Shushi organized by Azerbaijan’s President Ilham Aliyev.

In a letter to Greece’s Foreign Minister Nikos Denidas the ANC of Greece expressed dissatisfaction with the decision to have Greece’s Ambassador to Azerbaijan Nikolaos Piperigos to attend junket to the Azeri occupied territories of Artsakh, including Shushi.

According to Azad Or, our sister publication in Athens, the Greece ANC letter has received wide support in various stakeholder communities in the country, as well as on social media in Greece.

This prompted Greek lawmaker Nina Kasimati, the vice-chairmen of the Greece-Armenia Friendship Group in parliament, to address the issue in the legislature and after dispatching the Greece ANC letter, demanded that foreign minister Denidas appear in parliament and provide the necessary explanation.

Piperigos was among some 64 representatives of foreign countries accredited in Azerbaijan attended a junked organized by Aliyev to Shushi and other Azeri occupied territories over the weekend.

Below is the translated text of the ANC of Greece’s letter to Foreign Minister Denidas.

With surprise and great discomfort we learned of the participation of the Ambassador of Greece to Azerbaijan Mr. Nikolaos Piperigos in a provocative celebration organized by the Aliyev regime and included other diplomats accredited in Azerbaijan in the occupied Armenian city of Shushi in Artsakh.

Literally following Ankara’s demands and in line with similar provocative celebrations organized by [Turkish President] Erdogan in occupied Cyprus, the President of Azerbaijan invited representatives of states to “celebrate” with him.

To celebrate what? The hateful efforts of Azerbaijan, which continues to violate the agreements and invades the sovereign territory of Armenia?

Or to “honor” a dictator who still illegally holds Armenian soldiers and civilian captive after the end of the catastrophic war in Artsakh (Nagorno-Karabakh)?

It was no coincidence that the countries of the Minsk Group (Russia, the United States and France), as well as Germany and the United Kingdom, refused to abstain from the shameful visit, which was intended to disorient public opinion from the horrific crimes of Azerbaijan and the European Parliament’s resolution, which on May 20 by an overwhelming majority set a strong framework, criticizing Azerbaijan for its criminal practices against Armenia and Artsakh.

Unfortunately, the whole event had multiple messages, to which Greece should be the first to react, since the celebration was organized inside the sanctuary of the historic Gazanchetsots Church, with a decayed dome and vandalized conversions reminiscent of similar practices applied in the case of Hagia Sophia in Constantinople.

We believe that the presence of the representatives of the states, but mainly of Greece, encourages the outrageous and arrogant regime of President Aliyev.

The Armenian National Committee, as well as the Armenian Community of Greece as a whole, express their strong dissatisfaction with the participation of the representative of our country in this parody.

You know very well that Azerbaijan, by faithfully copying its mentor, is grossly violating the rules of international law. What is the purpose of the support provided by Greece in this critical time?
Armenia considers Greece as her most important ally. We want to believe that the same is true for Greece.”