1.3 Tons of Cocaine Seized in Brazil on Jet Linked to Erdogan 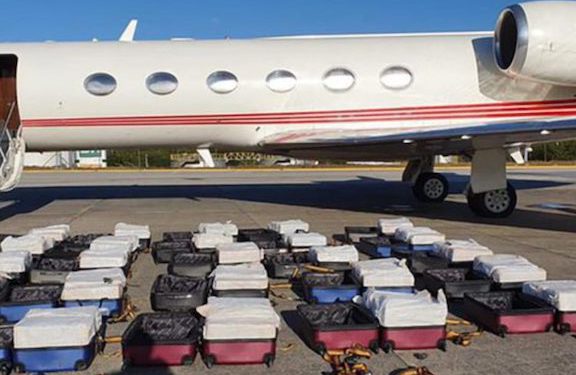 1.3 tons of cocaine was seized in Brazil on a jet with ties to Turkish President Recep Tayyip Erdogan

BY ABDULLAH BOZKURT
From Nordic Monitor

A cocaine bust in Brazil on a jet owned by a Turkish company has ties to the upper echelon of Turkey’s ruling Justice and Development Party (AKP), which is led by President Recep Tayyip Erdoğan.

The Gulfstream IV private jet with tail number TC-GVA, which was caught at Fortaleza-Pinto Martins International Airport loaded with 24 suitcases carrying 1.3 tons of cocaine is owned by investment firm Affan Yatırım Holding A.Ş. through its subsidiary, ACM Air. The company was established on August 31, 2012 by Şeyhmus Özkan, a known oil smuggler who enjoys political cover thanks to his close ties to the Erdoğan government. According to trade registry data filed in September 2012, its capital was 500,000 Turkish lira ($275,000); yet, he managed to purchase two multimillion dollar Gulfstream jets from the government fleet.

The Turkish media, controlled by the government to a large extent, played “three monkeys” on the bust in Brazil, ignoring the news, which is indicative of government censorship through cronies planted as editors in most Turkish media outlets.

No official comment was ever made and most likely no investigation was launched into the Turkish connection to the cocaine trafficking. That bears the hallmark of a coverup by Turkish authorities who fear an effective probe might expose the politicians who were protecting Şeyhmus from legal troubles.

Yıldırım was the most notorious name in Turkey’s convoluted “deep state” structure, a term used to refer to renegade groups and individuals nested inside military or state structures that often took the law into their own hands and were protected by the political authorities. He worked with organized crime, mafia groups and drug traffickers. He was presumed to be dead after his mysterious disappearance.

Hence, it is not unusual to see Şeyhmus’s name appear in drug trafficking that extends to Brazil. Şeyhmus, a Kurd from the southeastern province of Diyarbakır, and his family own nearly a dozen firms operating in various industries in Turkey, providing a perfect cover for their illegal operations.

In January 2011 Şeyhmus bought one-third of the shares of aviation and tourism firm Air Charter Market (ACM) Uçak Servisi ve Turizm Hizmetleri Limited Şirketi, originally established in 1991. He was also listed as the manager of the company with powers to fully represent it. A year later, all shares of ACM were transferred to his firm, Affan.

In June 2018 Affan was taken over on paper by Şeyhmus’s wife, Leyla Özkan. However, both companies filed for bankruptcy protection with a commercial court in Istanbul in July 2019. At the time, the companies had incurred TL 85.5 million (some $16 million) in debt. According to the bankruptcy filings, the family listed two Gulfstream jets — with tail numbers TC-GVA and TC-GVB — as collateral against their debt. The jets were valued at 68 million Turkish lira ($12.7 million) in 2019. Özkan promised to pay his debt while temporary bankruptcy protection was in effect, thus shielding his firms from debt collection.

Affan merged with project firm Asya Proje Geliştirme A.Ş. in December 2020, when the commercial court rejected an extension of bankruptcy protection for Affan in June 2020. Asya was originally established in October 2012 by Şeyhmus as part of Affan, anyway, and was also under bankruptcy protection at the same time as Affan as well as several other firms run by the Özkan family.

Affan was renamed ACM Holding A.Ş. in January 2021 with Şeyhmus’s wife the sole owner.
It appears the family was reshuffling shares among family members and caretakers and merging and renaming some 10 firms it controlled to avoid paying their debts.

Şeyhmus came up with such schemes in the past and had experience in dodging taxes and debts. A firm he established in 2010 under the name of Affan Havacılık Akaryakıt Turizm Sanayi ve Ticaret A.Ş., an aviation and oil trading business, had incurred 1.59 billion Turkish lira in back taxes.

The company’s shares were transferred to a caretaker named Murat Kuday, an unemployed person who was apparently selected for that role in October 2012 as part of a scheme to avoid paying the accumulated debt. The provincial taxing authority did not see any chance of collecting the back taxes from the company, which was rendered worthless since it was owned by a person who did not even have a job before taking over.

Şeyhmus’s close connections to the Erdoğan government helps explain how he managed to purchase two government-owned Gulfstream IV jets in October 2017. He owed over a billion Turkish lira in back taxes to the government; yet, the government did not see any problem in turning over two luxury jets to him.

It is clear that the sale, which was done discreetly, was quite unusual. The jets were operated by national flag carrier Turkish Airlines under registration numbers TC-ATA and TC-GAP. They were transferred to the Presidency of Defense Industries, the government’s top defense contractor, in 2016 before they were sold to Şeyhmus under new registration numbers TC-GVA and TC-GVB.

Şeyhmus reportedly paid $1.4 million for each jet, which had a market value of $5 million at the time. Designed as VIP planes, the government had spent $2.5 million just to refurbish them. They also came with brand new spare engines. In fact when Şeyhmus filed for bankruptcy protection in 2019, he declared the value of the jets to be $12.7 million. In other words, the government sold the planes at a loss of nearly $10 million.

Çiğdem Özkan, Şeyhmus’s sister, was a nominee for parliament on President Erdoğan’s party ticket in the 2018 general election. She is listed as the CEO of ACM Air.

Çiğdem Özkan is close to Ethem Sancak, a businessman who works with the Turkish president.

The profile of Çiğdem Özkan, Şeyhmus’s sister, explains how the family is connected to the Erdoğan government. Çiğdem was a nominee for a parliamentary seat on President Erdoğan’s party ticket in the 2018 general election and was also listed as the CEO of ACM Air.

The family has also worked with Ethem Sancak, a businessman who has cooperated closely with President Erdoğan in running multiple companies, some of which were transferred from state enterprises in lucrative deals as well.

The Brazilian authorities have said they have proof Deli had prior knowledge about the cocaine on board the jet. “The analysis we conducted on the plane and relevant places, information and documents which we obtained through research and interrogation all show us that the chief pilot had knowledge of the drug trafficking,” Alan Robson, the chief of the federal police in Ceará, told reporters.

The bust was filmed by the police in Brazil, and some of it was shared with local media. In the video police are seen opening one of the suitcases in front of crew members and passenger Gonzales, finding bundles of cocaine wrapped in plastic bags.

The plane was supposed to fly to Lisbon and then Brussels before returning to Turkey.
The Turkish Embassy’s unusual interest in the case explains the worry on the part of the Erdoğan government, which acted similarly when criminal operatives with connections to the Turkish government were caught by police in other countries. The prime example would be the case of Turkish Iranian national Reza Zarrab, who was detained by the FBI in Miami and charged with multiple crimes. Zarrab, who was close to Erdoğan and his associates, laundered Iranian money using Turkish banks and bribed senior Turkish government officials including three cabinet ministers. The Turkish Embassy went to great lengths to intervene in Zarrab’s case, while Erdoğan unsuccessfully lobbied both the Obama and Trump administrations to influence the federal case.

Nordic Monitor previously reported that Turkey has become an emerging route for large-scale cocaine trafficking, an unprecedented development, and it is alleged that a politically connected, powerful new player may have appeared on the scene to move large quantities of the drug through Turkish seaports.

The spotlight turned on Turkey in June 2020 when Colombia’s narcotics police seized almost five tons of cocaine. The drug was in two containers that were to travel by sea from the port of Buenaventura to Turkey and had a street value of $265 million in the illegal market.

Sedat Peker, a convicted mob boss and former ally of the Turkish president, recently claimed senior government officials were involved in the cocaine trade. Peker named Interior Minister Süleyman Soylu and his associates as influential people who were involved in facilitating the cocaine trafficking through Turkey. Peker had partnered with Soylu for years in running criminal syndicates. But he has recently come under fire after the two had a falling out, and Peker’s bombshell revelations from the United Arab Emirates, where he remains a fugitive, sent shockwaves across the Turkish political spectrum.