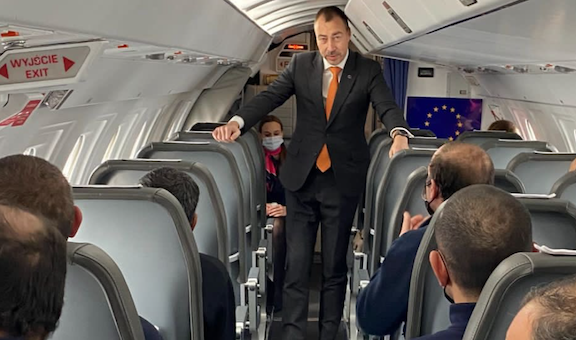 Toivo Klaar, the EU’s special representative to the South Caucasus on a plane carrying 10 released POWs

Through a mediation effort by the President of the European Council Charles Michel, ten more Armenian prisoners of war were released by Azerbaijan and arrived in Yerevan on Sunday, Armenia’s Foreign Ministry reported.

The prisoners were flown to Yerevan on a plane chartered by the EU, with the Toivo Klaar, the EU’s special representative to the South Caucasus, was also on board. Klaar said in a Twitter post that the EU will continue this effort, adding that Sunday’s mission was an “important gesture by in the process of addressing humanitarian issues.”

Armenia’s Investigative Committee’s spokesperson Vardan Tadvoryan told News.am on Monday that all 10 POWs have been interviewed and there will be no criminal charges filed against them.

This statement stems from the detention of four Armenia POWs who were among 10 released on December 4. These POWs were soldiers captured during Azerbaijan’s attempt to invade Armenia on November 16. Armenia authorities are charging the four POWs with not performing their duties during combat operations.

The news of the release of 10 POWs on Sunday was welcomed by Michel, France’s President Emanuel Macron and the State Department.

“Warmly welcome Baku’s release of 10 Armenian detainees in follow up to discussions with the President of Azerbaijan Ilham Aliyev and the Prime Minister of Armenia Nikol Pashinyan,” said Michel in a Twitter post describing it as “an important humanitarian gesture demonstrating the mutual will to strengthen confidence as discussed in Brussels.”

Macron praised the EU for its mediation saying in a Tweet, “I want to salute the decisive action of the European Union, with which we will continue to promote this path of dialogue towards peace between Azerbaijan and Armenia. We are going forward.”

In welcoming the captives’ release, the U.S. also urged Baku to release all POWs.

“We urge the full and expeditious release of all remaining detainees, exchange of remains, and accounting for missing persons. We stress the importance of humane treatment of detainees in accordance with international obligations,” State Department Spokesman Ned Price said in a Twitter post.

About 50 Armenian prisoners of war have been officially confirmed as being still held in Azerbaijan, Armenian human rights activist Siranush Sahakyan. who represents the interests of the captives at the European Court of Human Rights, said Monday.

She added that according to many estimates, there are about another 80 Armenian captives being held in Azerbaijan, but whose status has not been officially confirmed.

Sahakyan also noted that the repatriation of the confirmed Armenian prisoners is inevitable through the mediation of Russia, the U.S., France or other states.

Calouste Gulbenkian Foundation Allocates Over $140,000 to Armenian Schools in Lebanon