YEREVAN (Armenian Weekly)—A total of 165 Armenian servicemen—147 full-time soldiers and 18 volunteers—were killed in 2016, according to a new report released by Armenia-based Razm.info.

April of 2016 marked the first time the Armenian Armed Forces and Nagorno-Karabakh Republic (Artsakh) Armed Forces suffered the loss of volunteers since the ceasefire was signed in 1994. The April Four Day War left 18 volunteers dead (17 combatants and 1 noncombatant). Eight of the volunteers were killed on the road to Martakert when a car transporting them from Sisian was hit by an Azerbaijani drone. Two others that initially survived this attack succumbed to their injuries some days later.

The total number of deaths that took place during combat in 2016 was 108 (91 servicemen, 17 volunteers) while the number of noncombatant deaths was 57.

Ninety-one of the casualties died during the Four-Day War in April 91 (74 servicemen, 17 volunteers). 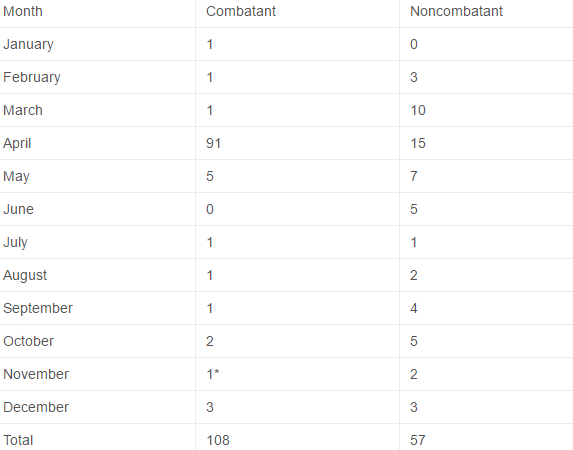 *This serviceman was wounded by a landmine explosion in July.

A total of 76 Armenian servicemen were killed in 2015. 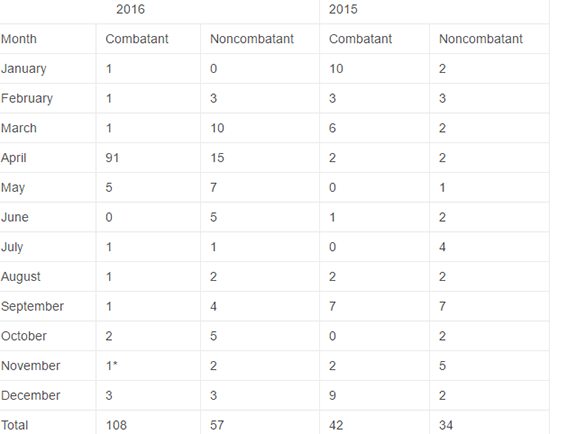 Murder, suicide, and casualties to due accidents are included in the noncombatant losses.

Razm.info compiled the numbers through a variety of public sources including the websites of Armenian Defense Ministry, the Armenian Armed Forces, the Investigative Committee of the Republic of Armenia, and other Armenian media outlets.

According to the report, the statistics of the human losses of the Azerbaijani Defense and Security Forces will be published by Razm.info in the near future.