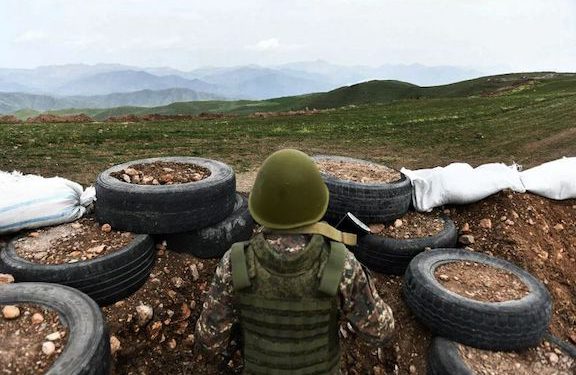 An Artsakh soldier in the trenches

Updated with change in number of injured and Artsakh’s president’s statement following an emergency session of the republic’s National Security Council.

As Azerbaijani forces ramped up their attacks on Artsakh positions, two soldiers and 19 others were injured on Wednesday, the Artsakh Defense Ministry reported.

Starting at around 9 a.m. local time on Wednesday, Azerbaijani forces targeted Artsakh Defense Army military positions, as well as the permanent location of the military units using mortars and grenade launchers, drones and other heavy artillery.

The Artsakh defense ministry reported that Gurgen Gabrielyan and Artur Khachatryan were killed during these fresh attacks. The ministry also reported that 19 soldiers were injured.

The Artsakh Health Ministry told Azatutyun.am that of the 19 injured soldiers, three were in critical condition and one was in severe condition.

As of 6 p.m. local time, it was reported that the situation was relatively stable as Artsakh forces, along with Russian peacekeepers were reportedly attempting to stabilize the situation.

The most recent attacks on Artsakh positions began on Monday when Azerbaijani forces targeted military positions in Berdzor (Lachin).

On Tuesday, the Russian Defense Ministry blamed Azerbaijan for violating the ceasefire on Monday as they tried to breach the line of conduct.

Harutyunyan also called another emergency session of Artsakh National Security Council. During the meeting he said that there were certain changes in the process to de-escalate the situation, both on the military front and also as it related to Berdzor (Lachin.) He did not elaborate further.

“Describing the actions carried out by Azerbaijan against Artsakh since August 1 as a provocation, I noted that the necessary steps are being taken through the command of the Russian peacekeeping troops stationed in Artsakh in order to defuse the situation and resolve it peacefully,” Harutyunyan said. “Therefore, I call on all our compatriots and ask them to maintain restraint and calm.”

“We can state that at this stage there are certain changes in the de-escalation of the situation related to both the military situation and the Berdzor corridor,” Harutyunyan said.

Artsakh’s foreign ministry, in a statement issued on Wednesday, strongly condemned the escalation of aggression by Azerbaijan, calling it “another brutal attempt to violate the peace and stability in the region and discredit the [Russian] peacekeeping mission.” The statement added that the recent attacks were party of Azerbaijan’s anti-Armenian policy.

“The Foreign Ministry of Artsakh calls on the international community to give targeted assessment to Azerbaijan’s actions and take adequate steps to restrain the destructive policy of the official Baku,” said the statement. “The people of Artsakh are steadfast and determined to live freely and sovereignly in their land and overcome all difficulties with honor.”

The Shushi-Berdzor-Goris inter-state highway remained open for two-way traffic, the Artsakh police said in a statement.

No incidents had been recorded in what is known as the “Berdzor Humanitarian Corridor”—the road connecting Artsakh with Armenia. Police said free and safe traffic is ensured by the Russian peacekeeping contingent.