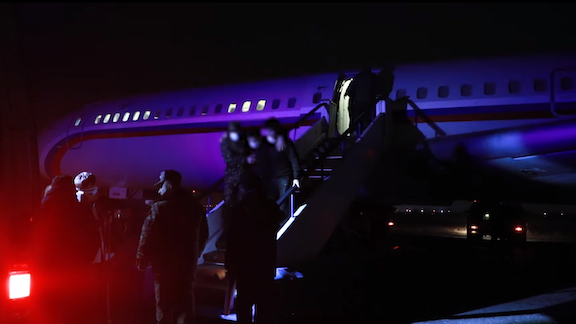 A plane transporting three Armenian prisoners of war, who were being held captive in Azerbaijan, landed in Yerevan’s Erebuni Airport on Tuesday, government sources reported.

“Thanks to the efforts of the OSCE Minsk Group Co-Chairing countries and the growing pressure of the international community, Azerbaijan has returned three Armenian prisoners of war. We hope this process will have its logical continuation and quick end,” the Office of caretaker deputy prime minister of Armenia Tigran Avinyan told Armenpress.

On Monday, a list of 19 Armenian POWs and captives, who have been brutally tortured and murdered by Azerbaijani forces was published by Artak Zeynalyan, an attorney representing the families of the victims at the European Court of Human Rights. Among those killed were 12 civilians, four of whom were women

Despite a clear provision in the November 9 agreement, which ended military actions in Karabakh, to return all captives and POWs, more than 200 Armenians remain in captivity in Azerbaijan. The Armenian government has said that it has returned all Azerbaijani captives within the timeframe specified in the agreement.
“Nevertheless, Azerbaijan brazenly and grossly continues to violate Article 8 of the Ceasefire Agreement as well as the III Geneva Convention on POWs of 12 August 1949 by holding Armenian servicemen and civilians. Furthermore, the Azerbaijani forces continue kidnapping ethnic Armenians – both men and women – in the post-war Nagorno-Karabakh. Several of them were brutally slaughtered, and those savage beheadings uploaded by Azerbaijani militants and circulated worldwide,” said a statement issued by the London-based British Armenian organization, which has been pursuing the release of the POWs.

“Time and time again shocking evidence of abuse and maltreatment of Armenian POWs and captives, encouraged by the Azerbaijani government led by Ilham Aliyev, has been documented by consecutive reports from Human Rights Ombudsman Arman Tatoyan,” said the group’s statement, which also referenced reports from Human Rights Watch published in December, 2020 and March, detailing the unlawful maltreatment of Armenian captives.

“Additionally, foreign reporters of leading international press ( such as the Guardian or BBC) have repeatedly brought to light the war crimes committed during and after the war by the Azerbaijani forces. Nevertheless, those shocking crimes against ethnic Armenian POWs and captives have not been firmly condemned by the United Nations, the Council of Europe, or human rights organizations such as Amnesty International,” said the group.

“During the spring session of the Parliamentary Assembly of the Council of Europe, the crisis of Armenian POWs was finally debated, which was followed by a statement of the CoE urging ‘the return of all remaining prisoners of war and detained persons, regardless of the circumstances of their arrest’. Nevertheless, the Council of Europe’s statement of 22 April neither criticized the brutal torture and killings of Armenian captives nor condemned the Azerbaijani government of war crimes. The Genocide against Armenians, based solely on their ethnicity, is taking place right now, in front of the ‘free, democratic world.’”

“We call upon the world leaders and international organizations defending human rights to decisively condemn the Azerbaijani regime led by President Ilham Aliyev of war crimes and order the immediate and unconditional release of ALL remaining Armenian POWs and captives before it is too late to save human lives,” the British Armenian organization said.