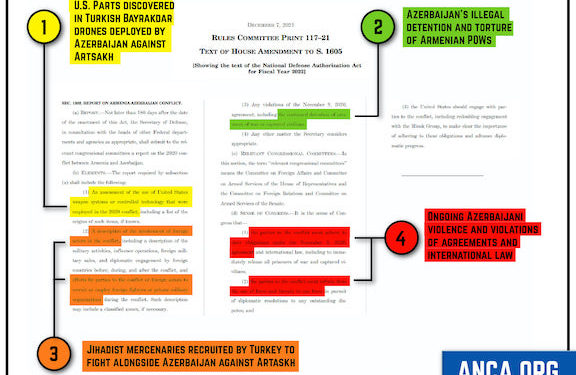 The four issues addressed in amendments in the 2022 U.S. Defense bill

A radically scaled back 2022 National Defense Authorization Act, the result of tense partisan gridlock in the US Senate, stripped out hundreds of amendments, including several provisions backed by the Armenian National Committee of America.

A pro-accountability provision that remained in the final measure calls for a “Report on Armenia-Azerbaijan Conflict,” ANCA reported.  While not calling out Azerbaijan’s aggression by name, this legislative language does point to four specific Azerbaijani transgressions:

The amendment was one of three offered to the Senate version of the National Defense Authorization Act (NDAA) that deals with US aid to Azerbaijan as well as Azerbaijani and Turkish war crimes committed against Artsakh and Armenia during the 2020 war.

Senator Menendez also offered a second amendment to the NDAA which called for a joint State Department and Defense Department report on Turkey’s use of US technology in its Bayrakdar drones, with a special focus on whether their sale to third countries, like Azerbaijan, violates US export laws.

A third amendment introduced by California Senator Alex Padilla (D) called for a joint State Department and Defense Department report, in response to Azerbaijani war crimes during the 2020 Artsakh war, including the use of US technology during the attacks; the use of white phosphorous, cluster bombs, and other prohibited munitions; and the hiring of foreign mercenaries.