A Donation In Honor of Asbarez’s Former Editor Melik Shah 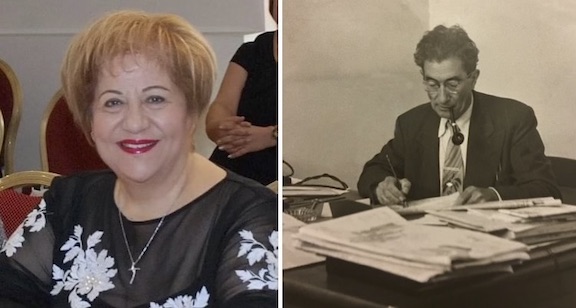 It’s that time of the year again when dedicated community members and supporters come together to mark the founding of one of this community’s most storied and important institutions, the Asbarez newspaper, which will mark its 114th anniversary next month.

It is on this occasion that we received a generous donation of $1,000 from one of the most committed and active community members in Fresno—where Asbarez got its start in 1908—Alice Gureghian, who dedicated her donation to Asbarez’s long-time veteran editor Melik Shah.

Melik Shah, who name was Armenag Melikian, was the father of Alice’s late husband, Garo, who passed away last year, leaving a legacy of service to the Armenian Cause and community.

In 2014, Garo and Alice Gureghian donated $300,000 to the Fresno Armenian Community Center, in honor of Garo’s son, Melik Shah. In 2017, following a major renovation, the center was rechristened in the couple’s name. In 2015, the Armenian Cultural Foundation honored Garo and Alice Gureghian during the organization’s annual gala, for their decades of dedicated service to the community.

Melik Shah, a poet and a leader of the Armenian Revolutionary Federation, assumed the editorship of Asbarez in 1949 and served in that position until 1952. He would return to helm the newspaper in 1969, replacing the storied editor Andre Amourian. Melik Shah stayed in the post until 1970, when Asbarez relocated its operations from Fresno to Los Angeles.

“[Melik] Shah’s language was different,” Megerdichian told Asbarez in 2002. “It was written for the average man to read and understand, like an editorial should be. But Andre Amourian’s language was more at an intellectual level. It was less accessible but added more character to the paper. So most of the time, the paper took the feel and quality of its current editor.”

“Melik Shah was one of the humblest persons I have known, with a fantastic sense of humor. He was more of a worker’s man and showed it. Once he finished writing his editorial, to him it was a celebration,” added Megerdichian.

The board of directors of the Armenian Media Network, the editors, staff and management of Asbarez would like to thank Alice Gureghian for her contribution and the dedication to Melik Shah. Her late husband would be proud.

What a great way to honor Asbarez and its important place in our community. We hope that Alice Gureghian’s gesture will serve as an example to others in the community as Asbarez’s 114th anniversary approaches.

Construction of Road Bypassing Lachin to Begin Next Month