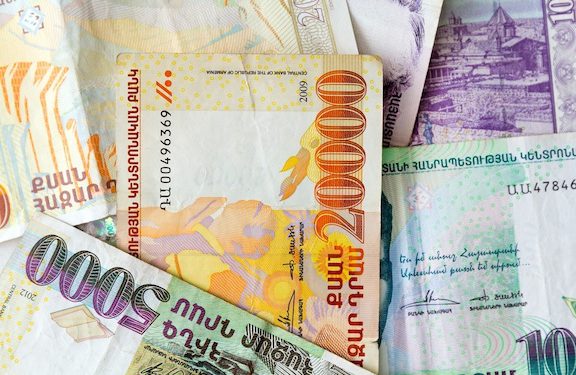 Armenia's currency, the dram, is taking a hit as a result of Russia's military action in Ukraine

Economic experts in Armenia are sounding the alarm on the potentially severe downturn in the Armenian economy as a result of the impact on the Russian economy because of the crippling Western sanctions.

They said that the Russian ruble fluctuations, which is directly impacting the Armenian economy, was among the factors in the study.

“And we shouldn’t forget that Russia is our main trade partner. That’s why negative effects in Russia are directly impacting our foreign trade turnover and subsequent economic developments,” Bejanyan said.

In the event of a zero growth in Russia, the 5.7 economic growth registered in Armenia in 2021 will shrink to 1.9 percent. Exports growth will comprise 8.4 percent, money transfers to Armenia would grow 12.1 percent, while the Armenian dram will appreciate by 2.1 percent.
In the event of a five percent economic decline in Russia, the Armenian real gross domestic product will drop 2.1 percent in 2022 and will lead to 0.7 percent drop in exports, 7.5 percent drop in remittances and 1.1 percent devaluation.

In the event of 10 percent decline, the economic losses will be more severe. In this case, the Armenian economic decline could reach 6.1 percent, while exports would drop 9.8 percent. Remittances would decline 27.1 percent and the dram would devaluate 5.1 percent.

Meanwhile, a survey conducted by the Russian central bank projected an eight percent decline for the Russian economy in 2022. If this happens, the Armenian economy will record a 4.5 percent decline, according to the experts. Exports could drop 6.2 percent, remittances to 19.3 percent and the dram would lose value by 3.5 percent.

The experts emphasized that the growing economic crisis in Russia is creating “significant risks” for the Armenian economy, jeopardizing its chances of potential growth.

According to the scenario, devaluation and economic decline should be expected in Armenia, mostly due to the decline in exports and money transfers. However, these assessments aren’t taking into account the possible positive developments, such as the inflow of Russian labor to Armenia, new exports opportunities, positioning as a logistic hub, new opportunities for financial service growth.

Bejanyan said that the Russian ruble has already strengthened its position within the new reality of sanctions after the nearly 50 percent devaluation in suffered at the onset of the sanctions.

Because Russia is Armenia’s main trade partner, the developments taking place around the Russian ruble are impacting the Armenian dram. However, in the recent period the dram regained some of its losses, with Bejanyan attributing this to several facts, among them a robust tourism flow.

He said that the main income of visiting foreigners is in dollars or euros. “This led to significant changes in our currency circulation. This is a component that strengthened the dram.” The other factor is the cenbank’s policy, he said.

The Armenian government’s initial forecast for 2022 was seven percent growth. However, the central bank already revised this projection, lowering it to three percent.

“This will naturally lead to a cut in state budget revenues. And if we take into account the finance ministry’s statement that no changes are planned in budget spending, this means that the government is inclined to compensate for the less collected revenues by involving additional state debt. And if we were to be guided with this scenario, then, if in the beginning of the year the state debt-GDP ratio was projected to be around 62 percent, in case of these projected developments it is very possible for this figure to be up to 68 percent,” the expert said.