A Home Away from Homes 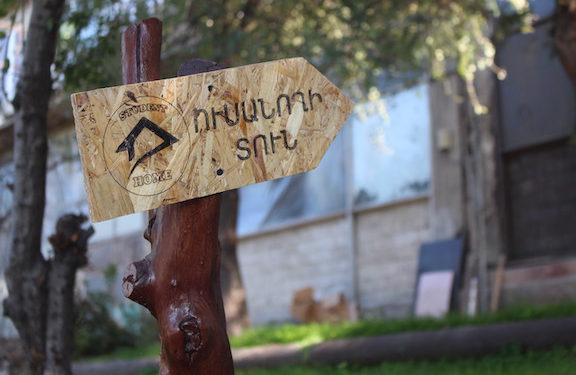 Students from Armenia’s and Artsakh’s villages hoping to attend one of the many universities in Yerevan face a number of obstacles, most importantly the challenge of affordable housing. Other difficulties include problems resulting from the poor conditions within many village schools where a lack of resources may result in inadequate preparation in some subjects. Unfamiliarity with life in a large urban environment may be another issue.

Families of students from remote villages who cannot afford to support a student’s independent living expenses in Yerevan may consider leaving their village and moving to Yerevan for the sake of their children’s education. But abandoning Armenia’s villages, and especially Armenia’s border villages, poses serious problems for Armenia. Villages must be strengthened, not emptied of families. Despite cases of underfunded and understaffed village schools, however, many students from such villages excel due to their strong work ethics, and sheer determination to succeed.

Student Home, under the auspices of Armenia’s Strong Minds, is an NGO established in 2021 by Mher Mkrtchyan – owner of a business in Yerevan, Tsovinar Sargsyan – a business leader and educator, and Paytsar Muradyan – a scientist, together with others. Student Home’s mission is to provide a supportive, affordable home for students from Armenia’s and Artsakh’s remote villages who are attending universities in Yerevan. Cost to students is approximately one quarter (25 percent) of the cost of university housing.

Additionally, Student Home provides a welcoming and supportive environment for young Armenians unaccustomed to a big city environment. Informal educational lectures on topics of interest are organized and tutorials are offered for students who may need additional instruction in subjects such as English or Russian language, or computer skills. When feasible, scholarships may be offered to some of the neediest students.  Just as important as the above, a community of determined young men and women from villages across Armenia and Artsakh is established. Though students are from different villages and are focusing on different majors at different universities, a common bond of community is established within a nurturing environment.

Student Home is located on 20 David Malyan St., Yerevan in a vacant factory building. As the building was unused, Strong Minds negotiated a low-cost 10-year lease on a portion of the building which they renovated with funds from Armenian and Diaspora donors. Much of the work was done by volunteers. Though construction work is not quite complete, there are currently about 30 to 35 resident students there (fall semester – 2021) with a goal of housing 45 to 50 students. There is the possibility of purchasing the facilities sometime in the future.

Student Home includes a large kitchen area, a meeting room for socializing or lectures, new bathrooms and a laundry. During an initial visit to their library, the library was about 20 percent populated with donated books. Each subsequent visit evidenced more and more books. Now sufficient books have been collected for some to be donated to village libraries, village schools, or community centers. Rooms are neat and modern with usually two students per room.

The environment is cordial, attractively furnished and decorated, with a sense of community among the student residents. In the entrance way there is a large, nearly completed painting of a map of Armenia and Artsakh. Each student will have his or her village marked on the map. During evening hours, a security guard will be posted at the Student Home and the entrance will be monitored with a surveillance camera.

Admission criteria are that students must be from remote villages, and must demonstrate a commitment to contribute to their village’s development. Participating students have the opportunity to attend a number of Yerevan’s universities including Yerevan State University, the State Engineering University (Polytechnic), the French University, the Russian University, and the Pedagogical University, with a number of majors including law, mathematics, architecture, international relations, science, psychology, philosophy, languages, and education.

Interviews with some of the students provided insight into students’ feelings for and commitments to their villages, and how they believe they may help. They also addressed some of their thoughts to the diaspora. The following are some excerpts from interviews with these young Armenian men and women:

Dianna Askaryan – from a border village in the Askaran region of Artsakh: She is majoring in international relations at Yerevan State University. She is sure she will be able to bring benefits to her country – “Armenia and Artsakh – one country, inseparable.” Her village has security issues which they need to deal with. She intends to establish youth activities upon her return, first in her village, then in neighboring villages. She said that without Student Home it would be difficult to rent an apartment in Yerevan. Her interview was in English which was quite good. She hopes Armenians from the Diaspora will visit Student Home.

Dianna Grigoryan, from Vanadzor, Lori Province, is studying IT at the National Polytechnic University of Armenia (Polytechnic Institute), hoping to pursue a career in data science and cyber security. She wants to use these skills to develop her country. In a message to the Diaspora, she said, “Follow your dreams and help your country, it’s our home.”

S. Torosyan, from Martuni, is studying at the Pedagogical University. He notes that his is a new village, established in 1921 by refugees from Western Armenia. His village, he says, is a replica of Western Armenia. He wants to return to his village and enhance youth activities there. “Student Home is like a large family,” said Torosyan.

A young woman from Aragatsavan is currently studying psychology and philosophy at Yerevan State University; subjects she has always been interested in. She wants to understand and help people, improve government, and collaborate with the Diaspora. She wants all Armenians to be united.

A young woman from Dilijan is majoring in European languages at Yerevan State University studying English, with a determination to learn German and other European languages and cultures as well. She praised Diljan’s beauty and attraction for tourists. She wants to represent Armenian culture to non-Armenians. “All Armenians should be united,” she said.

Ruzanna Vartanyan, from Artabuynk, Vayots Dzor Province, is studying architecture and construction techniques at Yerevan State University. She expressed a desire for unity with the Diaspora.

Narek Baghdasaryan, from Karmir Gyugh in Gegharkunik Province, is at the Polytechnic Institute majoring in engineering and computer science. He complains that the youth do not have enough after-school activities and many leave their villages. He is thankful for those who help and wishes “for a stronger government and strong Diaspora.”

Mariam Alexanyan, from Arevashat village, is a student at the Armenian Economic University. “My village is a beautiful village and I can not foresee living outside my village,” said Alexanyan. “Student Home has given me an opportunity to help my village.” She intends on returning and organizing the youth of her village to address village issues. To the Diaspora, she said, “Those who have not visited Armenia should visit at least on one occasion.”

S. Muradyan, who is originally from Horatagh village in northern Artsakh but now lives in Shirak Province in Armenia, is a 2nd year mathematics student at the Armenian – Russian University. Though his village is in a very suitable area near the north-south highway, he is dismayed that many villagers work outside his village. In regard to Student Home, he said, “I feel very comfortable here.” To the Diaspora, he said, “Sure, it’s easier out there. But come back and do here what you do there.”

A young woman, from Dzoravan, Gegharkunik Province, is studying tourism at the Armenian-Russian university. People from her village are originally from northern Artsakh. While the village population is decreasing, the number of youths is on the rise. Upon her return she intends to work with young people. She asks all Diaspora Armenians to act as ambassadors for Armenia and Armenian culture.

Samonik, from Sanahin in Lori Marz, is enrolled at the Armenian Pedagogical University learning how to help deaf children. She wants to help children overcome their difficulties. Her village, like most, depends on farming and raising animals but also has a cottage industry selling handicrafts to people visiting the Sanahin Monastery.

Nikolai Aghahjanyan, from Gegharkunik Province, is law student studying at the French University. Classes are in English, but by the 2nd year classes will be in French, which he is learning. He was always interested in law. He says the Diaspora can help Armenia even if they are unable to come to Armenia.

Information about Student Home is available on their GoFundMe page.