A Remembrance of Dr. Raffy Hovanessian on the First Anniversary of His Passing 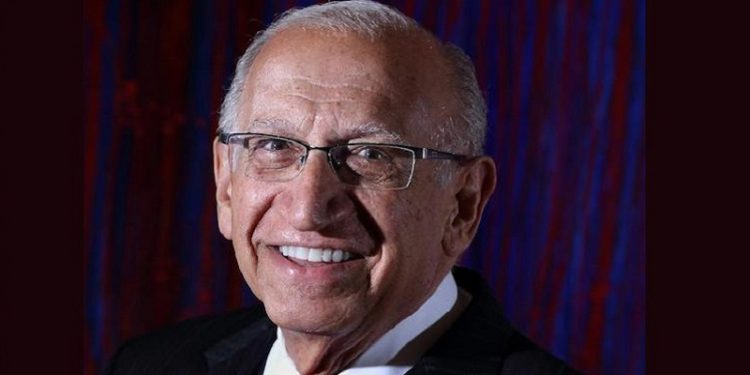 BY LEVON LAJIKIAN AND CHRIS ZAKIAN

“Let us never forget that we are Armenians. Our great connection to each other is that we belong to the same nation. The blood flowing in our veins is distinctive, unique; to infect it with mutual jealousy, animosity, and opposition would be a costly mistake.” – Dr. Raffy A. Hovanessian (1938 – 2020)

A physician in the truest sense, is not defined solely by his choice of profession. What defines him is a lifelong impulse to help others: a commitment to treat fellow human beings with compassion, love and respect.

May 27, 2021 marked the first year anniversary of the passing of Dr. Raffy A. Hovanessian.  Dr. Hovanessian was remembered in a private requiem service of the immediate family at St. Vartan Armenian Cathedral in New York City presided by Bishop Daniel Findikyan and Archbishop Anoushavan Tanielian.

In honor of the first year of his passing, the family has committed funds to two very important missions established by Dr. Hovanessian during his life: In 1986, the Clergy Endowment Fund for Higher Education of Clergy for the Brotherhood of Antelias,  and post humous in 2020, Continuing Medical Education of Doctors and Health Professionals of  Artsakh in Fund for Armenia Relief.

On the first Anniversary of his passing, the first mission which Dr. Hovanessian established back in 1986, the family directed a $100,000 distribution from the “Dr. Raffy A. and Vicki Shoghag Hovanessian Endowment Fund” to further the post-graduate education of clergy of the Brotherhood of the Cilician Catholicos of the Armenian Apostolic Church of Antelias. In the words of Prelate, Arch. AnoushavanTanielian, “Throughout his life, Dr. Hovanessian was a visionary to concentrate his efforts in enhancing the higher education of clergy as he firmly believed these efforts would strengthen the caliber of sermons and clergy’s efforts in spreading our faith and attracting the youth to attend Churches.”

Since his passing on May 27, 2020, today’s gift brings the total distribution from the “Dr. Raffy A. and Vicki Shoghag Hovanessian Endowment Fund for Higher Education of Clergy” to a total of $222,000 to the Brotherhood Catholicosate of Antelias, in the year 2020 to 2021.

In addition, in 2011, Dr. Hovanessian was the catalyst to establish Continuing Medical Education of Doctors and Health professionals in Yerevan and later in Artsakh while serving on the Board of the Armenian American Health Professional Organization together with his close friend Benefactor Mr. Nazar Nazarian under the  Directorship of Garnik Nangoulian of Fund For Armenia Relief. In Armenia, all the medical programs of F.A.R. since its inception, are implemented through the dedicated services of Dr. Hampartsoum Simonyan.

Post-Humous, the family established the “Dr. Raffy A. Hovanessian FAR Educational Fund” to continue Dr. Hovanessian’s vision for Artsakh, and his legacy as a Benefactor of its medical professionals in Yerevan and Artsakh.

On the Anniversary of his First passing, the family made a $25,000 donation to the “Dr. Raffy A. Hovanessian F.A.R Educational Fund.” The family wishes to continue his profound impact and legacy by continuing to support such noble spiritual and medical missions in Yerevan and Artsakh which he wanted to guarantee at any cost even before the September 2020 Armenia war.

Certainly, the name of Dr. Raffy Hovanessian will be remembered with honor, in death as it was in life. During his lifetime he was the recipient of numerous awards, from entities around the world. He was grateful for such recognitions—he was especially charmed that both he and his wife Shoghag had been awarded America’s Ellis Island Medal of Honor—while accepting them in a spirit of genuine humility and detachment. The glory of name-recognition was never Raffy’s motivation. What drove him, filling his life with consequence and joy, was the work itself, and the chance it presented to do a good turn to others—especially to his own people.

It’s not surprising that as a physician, Dr. Hovanessian was concerned with the health and well-being of his countrymen. He gave voice to that sentiment in an interview he once gave to Chris Zakian of the Eastern Diocese, “Let us never forget that we are Armenians,” he said. “Our great connection to each other is that we belong to the same nation. The blood flowing in our veins is distinctive, unique; to infect it with mutual jealousy, animosity, and opposition would be a costly mistake.”

In the year since his passing, Raffy’s words and life example have taken on a poignant urgency, as Armenians throughout the world seek voices of wise counsel to unite us, lift us up in spirit, and guide our aspirations towards truly productive goals—goals which would elevate all of our people, and would be worthy of our shared heritage.

During the private Hokehankisd, Bishop Daniel Findikyan addressd the family with these poignant words, “It is deeply regrettable that at such time, Raffy himself is no longer with us, to speak candidly (as he always did) to our present moment, and to help us address the profound challenges weighing upon us as a non clergy person.” Bishop Daniel further emphasized that, “Raffy’s authority to address these matters came from wisdom, humility, and love for the church.”

Nevertheless, the legacy he left behind is itself a guiding voice: a lifetime example of patriotic, compassionate, Christian outreach; a doctor’s thoughtful prescription to heal the afflictions with which we struggle today.

May his legacy be a guiding light for the younger generation to follow.

May he Rest in Peace.

An earlier version of this post had erroneously identified Vicki S. Hovanessian as the author of this tribute.