A Story about Armenians from Egypt 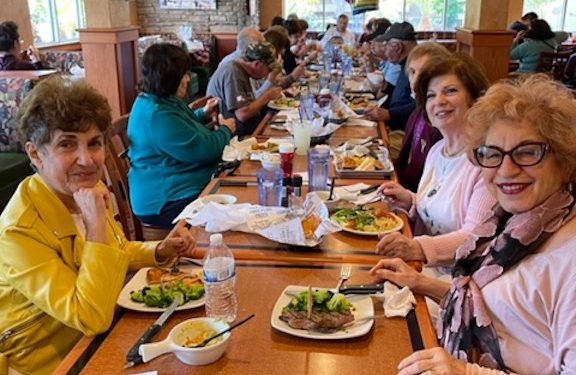 Today I’d like to share with you a story about a committed group of Armenian-Egyptians that meet for lunch every Tuesday. The restaurant they chose was Sizzler, once known as “The Sizzler Family Steakhouse.” This particular Sizzler is located at 2920 Los Feliz Boulevard in Los Angeles, about a minute from the Glendale border. It’s kind of an institution.

About 18 to 20 years ago, Ara Kessedjian from Egypt began organizing these lunches with a group of seven to 10 men. They first met at different restaurants, but since 2008 they started meeting at Sizzler and, little by little, women began to join them. Unfortunately Kessedjian passed away in 2010, but the group continued to gather each Tuesday—except for about 10 months during the pandemic.

My Egyptian-Armenian friend, Mary-Louise, introduced me to the group. The members come from near and far. Mary is one of the most dedicated members, driving up from Orange County, which is about an hour away.

On May 10 the group was going to celebrate the 90th birthday of Vram Sarafian who, with his wife, regularly attends the meetings at Sizzler. Mary invited me to attend the birthday. On that day, she picked me up and we drove to the restaurant together to join the rest of the gang.

There were about 30 friends at Sizzler. The parking lot of was full that day, because it was also Mexican Mother’s Day. With difficulty, Mary found a spot to park on street. Inside the restaurant, they had connected small tables together to make a long stretch to accommodate everybody. Out of 30 attendees, only 10 were men.

Most of the individuals in attendance knew one another from Egypt. Some had attended the same schools, like Kalousdian and Noubarian. Most men had attended the Mkhitarian Boys’ school and some women the Armenian Sisters Academy, called “Immaculate Conception” in Cairo. A few were from the city of Alexandria and had attended the Boghossian Armenian school there.

These lunches are open to anyone who wants to join. Even though most of them are from Egypt, there are also several Lebanese, Syrian, Sudanese, and Bulgarian Armenians. It is a fun group, because they converse and exchange dialogue relating to news about politics, health, and other topics. Sometimes the women bring pastries or cookies they have baked, or fresh fruit from their gardens. There are cakes and lots of sweets whenever there is a birthday—that’s when there are more people than the regular days.

Below is a little history on Armenians from Egypt.

History tells us that, as far back as the 7th century, there was a community of Armenians in Egypt. Coming into more recent history, the population of Armenians increased sharply due to refugees fleeing the massacres that took place in Turkey around 1915. The Armenian population reached a peak of 40,000 in 1952.

Today, the number of Armenians in Egypt has decreased to about 5,000. The exodus of Armenians from Egypt began around 1956, due to the introduction of the “Socialist Laws” and the nationalization of many economic sectors, which happened under the regime of the Prime Minister “Gamal Abdel-Nasser.”

Since Armenians worked predominantly in the private sector the Socialist Laws—sometimes known as Nasserism—affected them. Many Armenians were threatened by the new policies of Nasser’s regime. So, for a better future, they left Egypt and migrated to other countries such as the United States, Canada, and Australia.

At that time many Armenians lost the businesses that they had worked so hard to build from scratch when they emigrated to Egypt after escaping massacres while under Ottomans rule. Their businesses were confiscated by the government and their stocks completely lost their value. Mary told me that she still keeps, as a souvenir, the stock documents that her father had invested in, although their value has plummeted to zero. The Armenians from Egypt who came to the United States mostly settled in California.

Writing about the Tuesday lunches put me in the mood to continue with my own memories of Sizzler. It’s no secret that you can get the best steak dinner for the best price at Sizzler. When we had arrived in Glendale from Iran in the early ‘80s, it was Sizzler’s heydays. There were numerous enticing T.V. commercials of their shrimp and steak dinners, as well as their salad bar.

In those days, we often dined in that very same Sizzler on Los Feliz Blvd. However, little by little, our dining at Sizzler fizzled out. Maybe the reason was that some Sizzler branches started to close down, sending a message that something was going wrong. I’m glad I had the opportunity to go back to Sizzler. Last Sunday, my husband and I enjoyed a lunch there and remembered the halcyon days of Sizzler, when we used to dine there with our kids in tow.

Catherine Yesayan is a regular contributor to Asbarez, with her columns appearing under the “Community Links” heading. She can be reached at cyesayan@gmail.com.