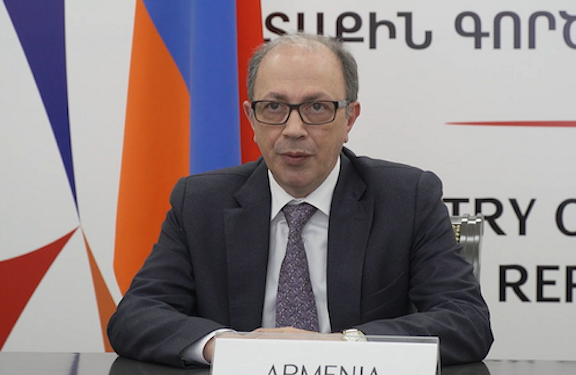 Our U.S. Department of State has a bad habit of lying about Armenians.

The facts are clear.

The pattern is evident.

In our American public record.

They shamelessly denied and covered up for Turkey about the Armenian Genocide for a century – A CENTURY+.

They still won’t admit the obvious truth that Azerbaijan attacked Artsakh last fall – EVEN AFTER ALIYEV HAS PROUDLY BOASTED ABOUT HAVING ATTACKED ARTSAKH.

They resist clearly calling out Azerbaijan for invading and currently occupying Armenian territory – DESPITE THE CLEAR EVIDENCE OF THIS FACT.

They claim – against all reason – that $120,000,000 in U.S. military aid to Azerbaijan didn’t contribute to Baku’s offensive military capabilities – A PAINFULLY OBVIOUS FALSEHOOD.

They take credit for post-war humanitarian aid – WHEN THEIR OWN RECORD SHOWS JUST $5 MILLION TO HELP ALL THOSE AFFECTED (ARMENIAN AND AZERBAIJANI) SINCE LAST FALL.

They advanced the career of Matt Bryza, misrepresenting him as an “honest broker” – WHEN HE WAS CLEARLY BIASED AGAINST ARMENIANS (unsurprisingly, after retiring, he raked in millions working for foreign/pro-Azerbaijan oil industry interests).

They lied about financing the Turkish Armenian Reconciliation Commission – ONLY TO HAVE THIS LIE UNCOVERED BY A CONGRESSIONAL RESEARCH SERVICE REPORT.

They talk about a diverse Foreign Service – EVEN THOUGH LESS THAN A DOZEN OF THE 23,000 AMERICANS WORKING FOR THE STATE DEPARTMENT ARE OF ARMENIAN HERITAGE.

They lied about Armenian prisoners of war, calling them “detainees” – UNTIL YESTERDAY.

All too often, when they do tell the truth – it’s because of community, coalition, and Congressional pressure.

When it comes to serious issues impacting Armenians, truth is their exception, sadly, not their rule.

A very bad habit, hardened over a very long time.

We might – for the sake of courtesy or a misguided desire for comity – politely ignore these lies – but that would be a disservice to America, an abdication of our responsibilities as citizens.

For nothing good can be built upon a foundation of lies.

We must – as Americans and as Armenians – confront each of these dangerous falsehoods.
Standing up to lies is a hallmark of American citizenship.

Accepting them is wrong – irresponsible on every level.

And, so we must and will call them all out, one by one.

Turn them toward truth.

Aram Hamparian is the Executive Director of the Armenian National Committee of America.