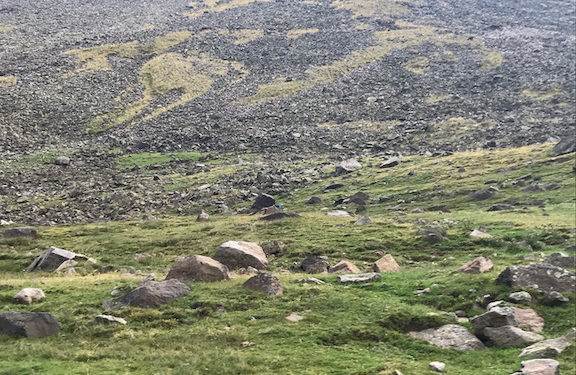 The slopes of Mt. Aragats

Armenia is about seven percent of the size of California. However, as small as Armenia is, there is so much to see.

During my most recent trip to the homeland, I signed up for a day trip to visit the slopes of Mt. Aragats, formerly known as Alagyaz. Throughout the many years that I’ve traveled back and forth to Armenia, I’ve toured the four corners of the country, but I never had the opportunity to visit Mount Aragats.

Our excursion began on a Sunday morning at 9 a.m., in front of the National University of Armenia, in Yerevan, known as the “Black Building” – a historical building built in 1905. After about an hour and a half of driving, we finally reached our destination – a small freshwater lake called Kari Lich, which translates to “Stone Lake.”

Mt. Aragats, with its four peaks, was sitting like a backdrop of a picture. The mountain was formerly one of the largest volcanoes in the world, but is currently inactive.

The lake is nestled at an altitude of more than 10,0000 feet above sea level. It was early August, but they had asked us to wear warm clothes. Indeed, the weather was cool and wet, and we needed an extra jacket.

The two sides of the road leading to the lake were covered with boulders of various sizes, which, thousands of years ago, were blown out of the mouth of the mountain.

Although Armenia is known to be a land covered with stones, I had never seen such a rugged terrain in Armenia. In early spring, I visited another region where the landscape was totally different – grassy and covered with blooming red poppies. It was an entirely different experience.

Next to Stone Lake is a restaurant where you can eat “khash,” a winter soup prepared from pig or cow feet. The table setting for khash has its own rules: salt, garlic, fresh herbs, radish, dried lavash, and vodka are necessities. When you visit Stone Lake, eating khash is a must. However, at 11 a.m., we were not ready to have lunch, so we decided to eat khash at another restaurant at a later time. For those unfamiliar with khash, it’s a delicatessen and one of the tastiest dishes in the Armenian cuisine.

Another interesting aspect about the surrounding area is that the land around Mt. Aragats has a magnetic field. We had the opportunity to experience this first-hand when the driver stopped the car on an upward position and put the car in neutral. The car started to slowly roll up the road on its own. I had a similar, strange experience, many years ago, when I was in Tehran.

After taking a few pictures and enjoying the fresh air and the scenery, we headed to our next destination, Amberd Fortress, which was not too far from the lake.

There are several, conflicting origin stories associated with the fortress. Generally, Amberd is known to be a 10th-century fortress, built from black basalt stone. In Armenian, the name translates to “Fortress in the Clouds.”

There are a number of scholars that believe the fortress was built during the Cyclopean period, while other scholars claim that it was instead built during Urartian periods. Amberd contains many of the characteristics of a feudal stronghold, including the fact that it is a difficult to reach location, protected by natural defenses.

Many fortresses built during the Middle Ages in Armenia were done so by a wealthy king named Ashot Yerkat, who banished Arabs and used his wealth to strengthen and fortify several other large fortresses. Many scholars credit him for the building of Amberd, as well. Amberd is sometimes referred to as the Fortress of Ashot Yerkat.

Down a few hundred feet from the fortress, there is a church called Vahramashen. The church is also commonly referred to as Surp Astvatsatsin or the Church of Amberd. It was built by Prince Vahram Pahlavuni of the Pahlavuni family in 1026. An inscription on the inside lintel of the north portal to the church indicates the year the church was built.

After a short visit to the church and fortress, we continued down the main road to a restaurant called Amberd Tavern, where we ate khash. The food was was very satisfying and the restaurant had a great ambiance.

Later, as we traveled further down to Byurakan village, we visited another church, which was built in the 9th century in dedication to to St. Hovhannes. Unlike the common structure of our Armenian churches, the architecture of this church was different. The building was rectangular, with a flanked, two-sided roof but no cupola, like a basilica.

Our tour guide brought to our attention the unusually high ceiling and the structure of the columns, which looked like the kind of columns I’ve seen in European cathedrals, but not in Armenian churches.

Afterward, we headed down toward a village, located on the southeastern slopes of Mount Aragats, called Tegher. The village earns its name from the large assortment of healing herbs that are found in the surrounding vicinity. In Armenian, tegh means medicine.

Up the hill from Tegher village, there’s a monastery and church which is also called Tegher, dedicated to Surb Astvatsatsin or St. Mary. The church was constructed from gray basalt in the 13th century, in the year 1213. According to the inscriptions on the stone of the entrance of the antechamber, the monastery was built by Mamakhatun, the wife of Prince Vache Vachutian of Ararat.

Tegher Monastery is included in the list of Historical and Cultural Monuments of Armenia.

Our last stop was in the village of Aghdzk, which is home to the Arshakid Kings Mausoleum, a large grave monument complex and basilica that dates back to the 4th and 5th centuries.

On our way back to Yerevan we could see the stretch of Mt. Ara or “Arayi Ler,” which is located about 25 miles north of Yerevan. The mountain is estimated to be around 10 million years old.

Mt. Ara is named after an Armenian prince of the same name. Legend has it that Prince Ara was so handsome that he was referred to as “Ara the Beautiful” or “Ara Geghetsik.” Shamiram, who was queen of the Assyrians, was in love with Ara and wanted to marry him to unite the two countries. However, Ara didn’t want to betray his wife, Nvard, or his homeland. After rejecting Shamiram’s offer, the queen waged war against Armenia, with the hopes of capturing Ara. However, her plan failed when Ara was killed in battle.

In an attempt to bring Prince Ara back to life, Shamiram ordered her guards to place Ara’s body on the peak of a mountain, so that aralezes could descend from the sky and revive him. In Armenian mythology, aralezes are dog-like creatures that have the ability to resurrect wounded or fallen soldiers by licking their wounds clean. However, no aralezes descended onto the mountain and Shamiram’s efforts proved to be futile.

According to some legends, Ara’s body remains on the mountain to this day. If you pay close attention, you can see that the outline of the mountain resembles the silhouette of a man lying down.

Hearing the legend of Prince Ara was a great way to end our sightseeing. I was home around 7 p.m., with my mind filled with new stories to write.