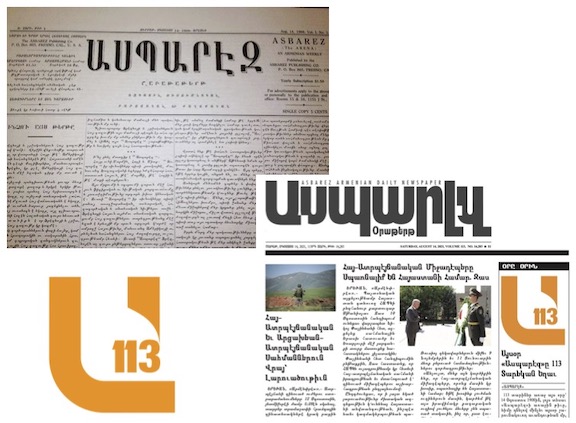 One hundred and thirteen years ago today, August 14, 1908, the first issue of Asbarez rolled off the presses

Asbarez Newspaper began publication in August 1908 in Fresno as a weekly. After several successful decades the offices and publishing headquarters moved to Los Angeles in the early 1970’s.

Asbarez mainly serves the Armenian-American community in the Western US. It is the only bilingual daily newspaper in the country, publishing five times a week, Tuesday through Saturday, with a print English section featured in the Saturday edition.

When Asbarez published its first issue, it did so with a commitment to become a trusted source in providing important news and information to the community, a commitment it has maintained and reaffirmed throughout the years.

The Armenian-American community was still in its infancy when the first-ever issue of Asbarez rolled off the presses. In 1908, the eyes of the community were on the fragile condition of the homeland. Today, almost a century later, with the ever-changing developments in the independent Republic of Armenia, the more mature and sophisticated community still looks to the homeland. Throughout the years, Asbarez has covered the tragedy of the Armenian Genocide, the triumph of the first Independent Republic, the growing pains of a community, the catastrophic earthquake, the fall of the Soviet Union, the Artsakh (Nagorno-Karabakh) liberation struggle, which gave way to the independent Artsakh Republic, and the ever-changing reality of the people of Javakhk in southern Georgia. For almost a century, Asbarez, not only has been providing news and information, but mobilizing communities to work with the ANCA and counter Turkish denial of the Armenian Genocide. It has been shaping opinions and is the arena many turn to for commentary, criticism and thought.,,,,,,,,,,,

Asbarez began publishing its English section on on May 1, 1970. Today, that section, which became a daily publication in January 1993, is the voice of the community and a source of information within the halls of Congress, in libraries around the country and newsrooms of major media outlets.

In keeping with changing times, Asbarez brought its tradition of accurate reporting and coverage of Armenian issues to the web by going online in 1994 and launching its web component in 1997. Over the years, asbarez.com has become one of the more widely visited Armenian websites with a large following online on its social media platforms and the daily Asbarez Post newsletters.

Asbarez is a subsidiary of the Armenian Media Network.