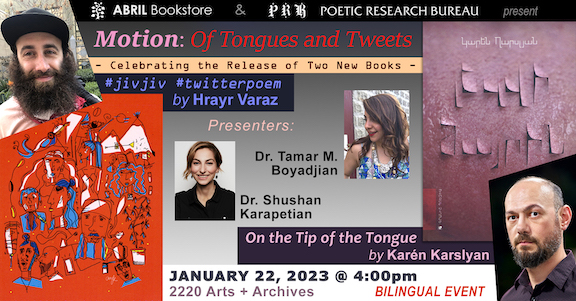 Abril Bookstore and the Poetic Research Bureau will host the release of two new books, Hrayr Varaz’s, “#jivjiv #twitterpoem” and Karen Karslyan’s, ‘On the Tip of the Tongue” at a bilingual event titled, “Motion: of Tongues and Tweets,” presented by Dr. Shushan Karapetian and Dr. Tamar M. Boyadjian. The event will be held on Sunday, January 22 at 4 p.m. at 2220 Arts + Archives, located at 2220 Beverly Blvd., Los Angeles, CA. Admission is free with reception to follow.  For more information, call (818) 243-4112.

This bilingual event will put into conversation the recently published poetry books of two contemporary Armenian authors of diverse backgrounds and styles who utilize the Armenian language in new and unique ways. Both works will be presented individually and as part of the dialogue in rethinking the role of language.

“On the Tip of the Tongue” is a mixture of conceptual, kinetic, cinematographic, and traditional poetry, written in Eastern Armenian during 2007-2022 by Karén Karslyan. Here language, exploding in the midst of endless wars (whether military or everyday-life), tries to outline new symbolic traces of expression from its own fragments, to give a name to reality and existence, and to look for ways to escape the absurdity of life.

Karén Karslyan is a poet, novelist, translator, musician, and a visual artist. He is the author of “On the Tip of the Tongue,” a poetry collection (Granish, 2022); “The Regime Is in Panic,” a tragicomedy (Actual Art, 2019); “Aterazma,” a typographic film (Inknagir, 2016), “Doomed to Spell,” a poetry collection (Inknagir, 2010); “X Frames/Sec,” selected works (Bnagir, 2003). Armenia’s public TV declared him the Scandalous Writer of the Year 2003 for X Frames/Sec. He is the recipient of 2004 Young Artists Award for the manuscript of “Password,” a novel.

Dr. Shushan Karapetian is Deputy Director of the USC Institute of Armenian Studies, which promotes research that examines the social, cultural, educational, and political challenges facing Armenia, Artsakh, and the Armenian communities in the Diaspora. She received a PhD in Near Eastern Languages and Cultures from UCLA in 2014, where she taught Armenian Studies courses for ten years. Her dissertation, “‘How Do I Teach My Kids My Broken Armenian?’: A Study of Eastern Armenian Heritage Language Speakers in Los Angeles,” received the Society for Armenian Studies Distinguished Dissertation Award in 2015. In 2018, she was the recipient of the Russ Campbell Young Scholar Award in recognition of outstanding scholarship in heritage language research. Dr. Karapetian researches, teaches, and writes about the Armenian experience, particularly focusing on competing ideologies at the intersection of language and the construction of transnational identity. She is the host of the popular IG/YouTube “Word of the Day” series through which she teaches Armenian in a fun and engaging manner. She is also host of the podcast series, “Language Therapy with Dr. K,” which looks at language, in all kinds of contexts, with an Armenian twist.

Dr. Tamar M. Boyadjian is a poet and translator and teaches courses on medieval literature, poetry  and translation. She thinks of herself as a sound-shaper and a wandering ašuł. Her work is experimental, intertextual, and intercultural; and explores themes around movement, subjectivity, symbols and transmission—drawing from the threats imposed on endangered languages such as her native tongue Western Armenian. She has authored, “it is what it is” (Andares, 2015), “the vineyard of mirrors” on Armenian and Afrofuturism (forthcoming, 2022), “Autobioliterature” (forthcoming, 2023). She has published her books of poetry and translation widely in a number of literary journals, creative anthologies, and international volumes around the world. She is the editor of two out of the three extant anthologies of translation of contemporary Armenian literature into English: “makukachu” (Ingnakir, 2017), and “unscripted: An Armenian Palimpsest [Absinthe: World Literature in Translation]” (University of Michigan Press, 2017). Her current projects include an anthology of poetry of Western Armenian women writers; a translation of Zabel Yesayan’s “In the Waiting Room”; and a translation with Dr. Maral Aktokmakyan and Dr. Rachel Goshgarian of Akabi Hikayetsi—the first known Armenian themed novel—from Armeno-Turkish to English. She is also currently the Editor-in- Chief of the “Journal of the Society for Armenian Studies.”