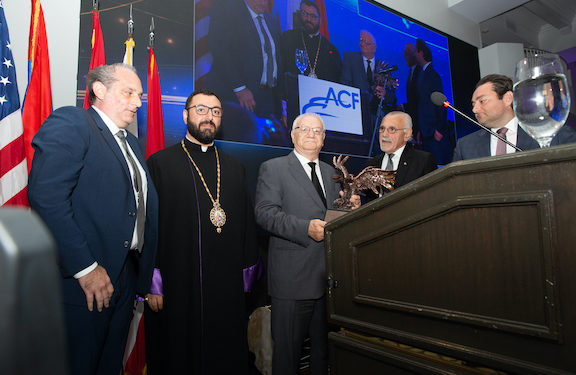 Meher Der Ohanessian, along with his sons, Ari and Saro were honored with the ACF "Legacy Award"

The Armenian Cultural Foundation, during its annual gala banquet on August 28, honored long-time activist and benefactor Meher Der Ohanessian, who along with his late wife, Satig, has been a driving force in the community through his service in various organizations, including the one that bestowed the honor upon him and his sons, Ari and Saro.

The gala was a celebration of the ACF 45 years of service and it was announced that the event raised $1 million for the organization’s efforts.

ACF Board Chairman Avedik Izmirlian, presented the organization’s “Legacy Award” to Meher, Saro and Ari Der Ohanessian in recognition of their unwavering support to the ACF during a special ceremony, which at the same time, became an emotional homage to the late Satig Der Ohanessian, who passed away last year, leaving behind a legacy of hard work, commitment and dedication to the Armenian cause.

In accepting the award, Der Ohanessian, first voiced his delight that after a two-year hiatus due to the pandemic, the members and supporters of the ACF have come together to celebrate “the extraordinary work that has been undertaken every year.”

“I am proud to have been part of this organization,” said Der Ohanessian in his humble remarks. “My late wife liked to tell me that the ACF has a special role in our community. Today, I can definitively say that we will continue to support our community.”

“My mom, Satig had boundless love and energy for the Armenian Cultural Foundation which she viewed as her extended family on a mission to serve, and to preserve our Armenian diasporan community and its legacy in arts and literature. She cherished our community so much it’s hard to describe. She loved working with you, she loved being with you, and most importantly, Satig loved serving with you as fellow stewards in our collective efforts to make the world a better place, especially mer Hayoutyan hamar (for the Armenian peopel). This mission, along with tending to her growing family, made her so very happy,” said Saro Der Ohanessian.

“To this end, Satig tirelessly advanced an enduring commitment to ACF as a hallmark of her community service. She put her resources and precious time into the ACF’s sacred mission at every opportunity… Speaking of ‘sacred mission,’ it’s through the ACF, and in fact this very room a mere 9 years ago that I met my beloved wife Theresa who has gifted us with two splendid children…so I will certainly attest to the fact that the mission is working,” added Saro Der Ohanessian. “For mom, it wasn’t just ACF, but the entire array of Armenian benevolent organizations, especially under the Prelacy’s auspices that were important to her. The lessons and mysteries of the Armenian Apostolic Church, the Homenetmen credo ‘Partsratsir Yev Partsratsoor,’ Hye Tad’s activism, and the holy values of selflessness, service and altruism.”

“Satig was our family’s matriarch and pillar, our supporter and guide, our motivator and unshakeable cornerstone. And she tried to be the same for our community; whenever and wherever she could, encouraging all – family, friends and neighbors alike – to service. Time and again she set the example by doing acts of leadership just as we must all do. I’ll say that again: Satig served by example. That is her legacy. That is the legacy I hope to personally emulate and to teach my own children and grandchildren. That is the legacy each of you – already thankfully engaged in service – might take with you as you leave here today. And that is the legacy my family and I commit to carrying forward now and forever on our mission to strengthen our community’s foundation one stone at a time through Armenian Cultural Foundation and beyond. We as a community have faced many challenges these past few years: Geopolitically; both within our borders and outside, challenges of war and impending policy; it is now that we need to mobilize our strengths and efforts more than ever and support, participate and undertake in all of our capacities for the singular effort of and simply for, an Azad Angakh Hayastan…,” expressed Saro Der Ohanessian.

In his remarks, Western Prelate Bishop Torkom Donoyan praised Meher Der Ohanessian’s generosity toward the Prelacy and the Armenian Church, saying he was fulfilling his Christian mission. In July Meher Der Ohanessian served as the “godfather” of the blessing of the Holy Water ceremony at the Catholicosate of the Great House of Cilicia.

Among the many projects that the Der Ohannesians have advanced throughout the years was the generous contribution to the ACF toward its Armenian Youth Center in La Crescenta. During a special ceremony, the facility was inaugurated as the Meher and Satig Der Ohanessian Center.

The more than 300 supporters, donors and community leaders who had gathered at the Beverly Hills Maybourn hotel for the event rose in a standing ovation in show of their appreciation and respect to Meher Der Ohanessian and his sons, Ari and Saro.

In powerful remarks, Armenian Revolutionary Federation-D Western U.S. Central Committee chairperson Dr. Carmen Ohanian encapsulated the challenges facing our nation and our community and called on all Armenians to continue their fight for the salvation of our homeland.

She emphasized that the organization continues to serve the community, the people and the homeland diligently, without fail and without compromising its principle.

“We have endured a difficult two years as a nation. We lived through and are continuing to witness the tragedy of the Artsakh war and its bitter realities and the negative consequences,” said Ohanian. “Sadly, today we are witnessing the evacuation of Berdzor, Aghavo and Sus along the Lachin corridor that connected Armenia to Artsakh and was relinquished to Azerbaijan under direct international pressures.”

“Our people in the homeland are living through truly detrimental times and the Armenians of the Diaspora cannot remain indifferent to these realities. The Diaspora, time and again, has proven that it, too, is burdened by the challenges facing Armenia and Artsakh, and it rejoices with the achievements of our homeland,” said Ohanian.

The ARF leader said that during and after the war, the Western United States region supported the families of martyred and wounded soldiers, as well as those displaced from Hadrut as a consequence of the war.

“We did our utmost and stood beside our people in the homeland. We did not spare a thing to do whatever was necessary to help our compatriots in Armenia, Artsakh, Lebanon or wherever else there was a need,” said expressing gratitude to supporters and benefactors for their consistent support and noting that in difficult economic conditions, their benevolence carries an even greater moral value.

Ohanian continued by reassuring those present that the Armenian people, who have sacrificed and lost their lands in various stages of history, have always found a way to survive, to fight and to restore their national dignity.

“During such days, when our homeland is surrounded by foreign enemies who are always ready for their ambitious plans to trample upon the rights and borders of Armenia and Artsakh, we are obligated to protect and cherish the independence and security of Armenia and Artsakh through unity and mutual understanding,” said Ohanian. “We must continue our struggle together, until the ultimate victory.”

The message of unity was also echoed by Izmirlian, the ACF Board Chair, who emphasized that the organization has been successful due to the firm belief in collective efforts.

“We believe that when we come together and work in a united fashion, we can achieve more. Not only is unity important to our organization, but it also enhances our community’s collective achievements,” said Izmirlian. “This should serve as an example to other communities, but more importantly to the homeland, where national unity is urgently needed.”

“It is thanks to the spirit of unity that the ACF family has worked together as a team, and even during the difficult times of the past several years, our work never stopped. On the contrary, despite the developments of the past two years we were never demoralized… In fact, the dire circumstances we faced as nation, gave us a higher sense of responsibility and commitment,” added Izmirlian.

“During this time, the organization has been focused and more production and we could not have achieved that without you—YES, ALL OF YOU—who never wavered or shied away from cooperating and engaging in our mission,” explained Izmirlian. “Throughout this time, we diligently have maintained our facilities and were able to undertake some much-needed improvements. We have our assets safe and intact, and as you saw in our video presentation, we were still able to continue our assistance to youth programs, and allocate funds for other cultural, humanitarian and educational projects, be it here, in Armenia, in Artsakh, in Lebanon or elsewhere.”

In his remarks, Izmirlian recognized Western Primate Archbishop Hovnan Derderian and Western Prelate Bishop Torkom Donoyan, as well as Reverend Henrik Shahnazarian of the Armenian Evangelical Church who were all present at the event.

The ACF can only reaffirm its commitment to the cause through the eternal embrace and dedication of its counterparts. It stands firm and it’s course to preserve and enrich the Armenian culture and heritage,” said Elizabeth Boyadjian, the banquet committee chairperson during her welcoming remarks.

“As members and supporters your unprecedented commitment to our issues is unparalleled and for that we humbly thank you,” added Boyadjian.

“Despite the everchanging political climate our mission as Armenian Americans remains steadfast, fighting on different terrains toward the same objective. We must unite, we must be heard, we must do better,” added Boyadjian.

“With you support the ACF will continue its efforts to educate and breed a new generation of activists who will take this organization to new heights in realizing our goals and protecting our national interests,” said Boyadjian in thank all the attendees.

She expressed a special message of gratitude to Varant and Hoori Melkonian who generously sponsored the evening’s expenses.

Also announced was a generous donation from Alice Gureghian, who along with her late husband, Garo, were the benefactors of the Fresno Armenian Center, which was rechristened to bear their name. This year Alice Gureghian gifted an apartment in the heart of Yerevan to the ACF.

During the evening, a video presentation chronicled and celebrated the ACF’s activities in the past 45 years, while an “in memoriam” video honored ACF members and leaders who had passed away during the past two years.

The event began with the singing of the Armenian and U.S. National Anthems. The evening included a variety of performances. Musical selections throughout the evening were performed by Molto Legato. Berj Karazian, accompanied on the organ by Armine Ghazaryan also performed renditions of traditional Armenian songs, Araksya Amirkhanyan delighted the crowd with her own songs.