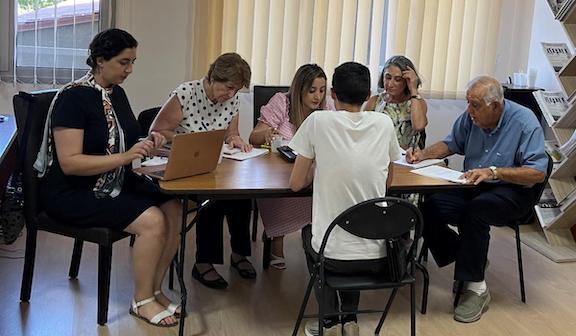 The Armenian Educational Foundation received over 2,100 qualified scholarship applications from students attending universities in Armenia and Artsakh. Using a mathematical model, 820 applicants were selected for interviews. Two panels conducted interviews over a 12-day period from 10 a.m. to 5:30 p.m. This was a very emotional yet rewarding experience.

The panel heard various heart wrenching stories from students and, in particular, from veterans of the 44-day war. The difficult task will be selecting 300 students who will receive AEF scholarships.

Two interviewers wrote about their experience on the interview panel:

“The last week I have spent with AEF conducting scholarship interviews has been enlightening, difficult, inspiring, and hopeful,” said Nanor Balabanian. “I have been working in Armenia for the last 13 years, but I had not yet had an experience such as this one. I cannot begin to explain how much I have learned in these weeks compared to those 13 years. It was as if the villages of Armenia and Artsakh came to us, versus us going to all of them (which would be impossible in 2 weeks). We got to hear the good, the bad, and the ugly but also learn how much hope there is for our nation.”

“At times, I couldn’t bear being in the interview session due to the difficulty of the stories and hearing about the pain people have experienced,” Nanor said.” Other times, I was crying tears of joy looking at our future generation. I can confidently say that I will forever be an AEF scholarship board member as this was one of the biggest honors I have experienced in my life. Each story, each student, each person gave to me more than I could ever give to them. They gave me hope and confidence that we will be moving forward together. We have a very bright future ahead of us, but we also have a lot of work to do in our education system, and as a teacher, I simply cannot wait to be a part of it!”

Nanor is a former AEF Tufenkian scholarship recipient from San Francisco. She attended UC Santa Barbara and Stanford. She is one of those patriots who visited Armenia each summer and moved to Armenia two years ago.

“I just got off the phone after number of hours of interviews with Vahik and the group in Armenia for the scholarship applications,” said Lina Davidian. “By far this has been one of the most unique and unforgettable experiences of my life. You know I don’t generally get very emotional about things; however, this was truly an unforgettable journey. After experiencing all the disappointment and the let down with the aftermath of the war, and the general political situation, meeting these young bright students gave me new hope and the resolve that we need to do anything and everything in our power to be able to provide these students the opportunity to be able to complete their education and help rebuild Armenia.”

“It was incredible to see that despite all the difficulties that they experience on daily basis just to make ends meet, they are so focused on their education,” said Lina. “There was this young 18-year-old that lived less than a kilometer from the border with Azerbaijan in a small village. No one in her family had ever gone to college but she was going to do anything and everything in her power to get her degree in astrophysics. She was unable to travel to Yerevan for the interview and had decided to appear via zoom.”

“Each applicant was as qualified, and as determined as the next. It is absolutely heart wrenching to have to turn away so many bright students,” emphasized Lina. “A common message resonated throughout the interviews. They believe in the fact that with education they can have better jobs and will be able to provide for themselves and their families and make things better for their country. As one applicant said there is no reason why our villages should not be as nice as Yerevan so we can find everything we need and be able to keep our communities from leaving the villages. This is exactly what our country needs now to rebuild and stand strong,” she concluded.

Lina, who lives in Glendale, participated in the interview process via zoom, from 11:00 p.m. to 2:00 a.m. PST. She is an attorney and an AEF scholarship sponsor.

Armenia Doesn’t See Much Progress in Talks with Turkey