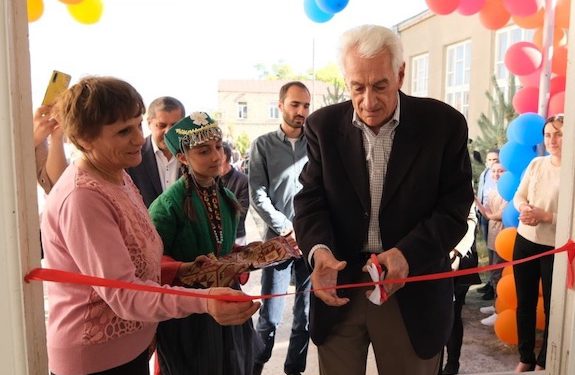 The Kornidzor School, located in Armenia’s Syunik Province, has just undergone a full-scale transformation. Thanks to a generous $20,000 donation toward the project from Valentine Pakhanians, in memory of her late husband and former Armenian Educational Foundation Board Member, Galoust Pakhanians, the school now boasts a newly renovated gymnasium and computer lab, pristine classrooms, hallways, floors, windows and doors, as well as a completely renovated exterior.

According to Neshan Peroomian, the head of AEF’s school renovation projects in Armenia, the total cost of construction on the school was $42,000.

“AEF has transformed the school from ruins into a well-built, safe and bright learning space for the children of Kornidzor, which is the last village before entering Artsakh. In result of the 44-day war and Azeri advancement, it has become like a peninsula surrounded from three sides by Azeri forces. The school’s playground is within the enemy’s shooting range,” said Peroomian.

Having been bombed during the 1991-1994 war, the school was previously only partially renovated and in need of major improvements. And most recently, due to the 44 day-war, the school lost around 20 students as families have relocated to safer areas. The village lost six soldiers in the war. Now, the school honors the memory of these soldiers, all its own graduates, by dedicating a classroom to them.

“AEF has given hope to the people of Kornidzor Village, to feel that they are not alone. You are encouraging them to stay, live, learn and fight for their homeland,” said Avanesyan.

AEF president, Al Cabraloff commented, “Today’s global circumstances put more pressure on Armenian villages by threatening their mere existence. Building on our efforts to keep families in border villages, AEF has expanded its efforts to help transform the most vulnerable and needy schools in Armenia and Artsakh.”

Recognizing the importance of the village, AEF has focused its renovation program on village schools throughout Armenia, Artsakh and Javakhk, renovating a total of seven schools just this year. For 71 years AEF has been providing financial assistance to students and educational institutions, including the allocation of funds for student scholarships, school grants and renovations of over 200 schools. This could not have been possible without the generous support of their benefactors and members.