After Abandoning Artsakh, Pashinyan Now Gives Up the Armenian Cause 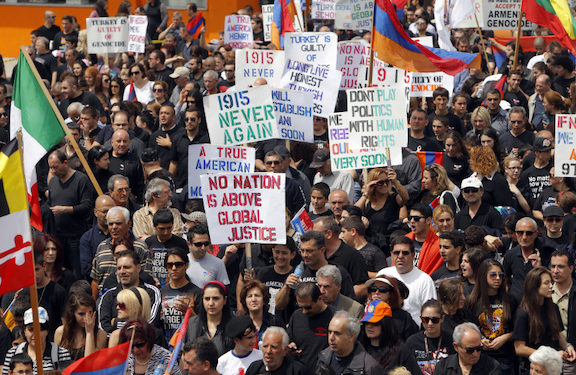 Over 160,000 attended March for Justice to mark the centennial of the Armenian Genocide

It is simply amazing that every time Prime Minister Nikol Pashinyan opens his mouth, he makes a new and bigger blunder. To be convinced of this, all one has to do is follow his speeches, press conferences, contradictory statements in the Armenian Parliament, Facebook postings, flawed decisions and unqualified nominations. To make matters worse, he does not seem to learn from his errors. Pashinyan neither realizes nor admits his mistakes. He seems to be incorrigible.

On January 24, 2022, the Prime Minister gave another one of his so-called press conferences. No reporters were present to ask questions and challenge his misstatements. It was a poorly-orchestrated show to mislead the public. A young lady read the questions supposedly sent by the media. When one of the journalists complained later that his question was presented in a garbled manner, the young lady honestly confessed that she had simply read the questions given to her by the Prime Minister’s aides.

Among the Prime Minister’s biggest blunders was his reply to a question about Armenian historical demands from Turkey. Pashinyan stated that “the Republic of Armenia has never conducted a policy of the Armenian Cause. Never.” I seriously doubt that he knows the meaning of “the Armenian Cause.” His comment is no different than what a Turkish official would have said. It is shameful that after the horrendous genocide that was committed against Armenians in 1915-1923, killing 1.5 million innocent men, women and children, and dispossessing them of their historic homeland, the Prime Minister so casually dismisses Armenians’ just demands and acts as if nothing had happened. This is exactly what the Turkish leaders want — that Armenians forget about the past and drop their demands.

Furthermore, the Prime Minister falsely stated that President “Robert Kocharian in 2005 publicly announced that Armenia does not have territorial demands or territorial expectations from Turkey.” I recall reporting about Kocharian’s statement back in April 2005, when a Yerevan State University student asked him about Armenia’s demands for land from Turkey. Kocharian cautiously responded: “This issue would have to be taken up by a future President.” It is clear that at a time when Armenia had its hands full dealing with the conflict with Azerbaijan over Artsakh, it was not in Armenia’s best interest to open a second front with Turkey over Armenian territories. Kocharian did not say that Armenia had no territorial demands from Turkey. He simply said that the resolution of that issue has to be taken up at a later date. It is a shame that Prime Minister Pashinyan repeated what the Turkish media had falsely reported rather than what was actually said by the previous President of Armenia.

Coming to the issue of the Armenian Genocide, Prime Minister Pashinyan wrongly stated: “We must register that the locomotive behind the process of the recognition of the Genocide has always been the Diaspora and Diaspora organizations.” This is exactly what the Turkish government would want the Armenian leader to say. There are several things wrong with the Prime Minister’s statement.

The Prime Minister also made many other misstatements in his over two-hour-long so-called press conference. However, an entire book has to be written, not just an article, to expose all of his misstatements.