After Starring in ‘The Kite Runner’ on Broadway, Actor Eric Sirakian Soars to New Heights 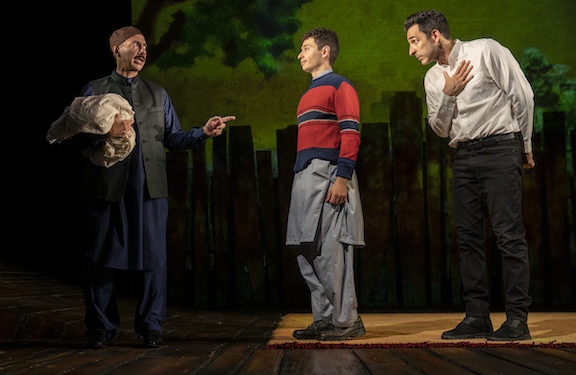 BY GAYANÉ KALIGIAN
Special to Asbarez

Since moving to New York to star in The Kite Runner, Matthew Spangler’s theatrical adaptation of Khaled Hosseni’s award-winning 2003 novel, Eric Sirakian spent hours in daily Dari lessons with a teacher in Kabul, alongside the usual demands of a young playwright and actor performing eight shows a week.

On a quiet Thursday morning in October, however, Sirakian spoke to me over Zoom about his achievements as one of the Armenian diaspora’s rising artistic stars, just hours before he leaves to perform in that evening’s show.

The Kite Runner opened on Broadway on July 21 to excellent reviews, many of which praised its small but mighty cast of 19 actors, who undertake a harrowing tale of loss and loyalty through the eyes of one man as he reflects on his life as a child, and later a refugee, in Kabul in the 1970s.

In this production, Sirakian plays two different roles: both eleven-year-old boys living in Kabul during a time of political turmoil. In act one, he is Hassan, the servant and playmate to protagonist Amir, played by Amir Arison; in the second act, he plays Hassan’s son Sohrab, an orphan of the war in Afghanistan and a foil to Amir as he struggles to reconnect with his homeland and right the wrongs of his youth.

I saw The Kite Runner in August and was struck instantly by Sirakian’s performance, which carries a deeply emotional sincerity and forms the very heart of a show which strives to tell a singular story from the vast cultural experience that is modern Afghanistan. As soon as I had a chance to look at my program I wondered: Who was this young Armenian? And what is he doing playing an eleven-year-old Afghan child on Broadway?

Sirakian was born in Massachusetts to Armenian parents who encouraged him to try anything and everything. He landed on theater at the age of six, after performing in a touring cast of Terezin: Children of the Holocaust, which is commonly used as an educational tool or schools to introduce the more difficult realities of the Holocaust to students. Even at such a young age, Sirakian “felt the energy in the room after the story was told” and understood the power of theater as a tool for change. He took this understanding to Yale, where he wrote Ermeni, a play which depicts an Armenian family thrown into crisis when their daughter brings home a Turkish boyfriend. Producing the play in 2015, in honor of the centennial of the Armenian Genocide, solidified Sirakian’s perception of the “collective responsibility” Armenians carry as storytellers for our cultural experience.

It is this power that informs his work in the Kite Runner, where cultural storytelling is perhaps the most crucial aspect. Sirakian’s characters are both Hazara, an ethnic minority group which bears a long and traumatic history within Afghanistan. He saw the parallels between Hazaras and Armenians right away: both have faced persecution in their respective regions – in the 1890s, the Afghan government launched a campaign of ethnic cleansing which killed over sixty percent of the total Hazara population – and both have had very few chances to see their stories told in mainstream media. While he himself is not Hazara, Sirakian entered the production with his own cultural background in mind:

“Something I spoke about in my audition, in terms of my heritage and why I’m maybe uniquely qualified to play Hassan onstage, even though I’m not Hazara, is because this is something that Armenians know and feel, you know, it’s in our blood, we know what it is to be survivors of a difficult past,” said Sirakian.

This process began in March of 2022 with a crash course in Dari, interviews with nearly a dozen members of the Hazara community, and a close relationship with cultural consultant Humaira Ghilzai, who works with the entire cast and creative team of The Kite Runner in order to provide an accurate, nuanced portrayal of Afghanistan.

“I just felt this huge responsibility. I thought when that Hazara audience member comes, I want them to feel like they are seeing themselves on stage, they’re seeing their culture and their history represented as perfectly as possible. So I wanted to learn the language. I took lessons — am still taking lessons — in Dari with a teacher in Kabul over Skype. I wanted to learn all about Hazaras, not just what you can read in books, but the lived experience. So I spoke to about a dozen members of the Hazara community in London and in New York, most of whom had grown up in Afghanistan, who had been born there and at some point had to leave, and now, obviously, can’t go back,” Sirakian explained.

Sirakian’s expansive knowledge shows, both in performance and in conversation – he lights up when discussing his adventures in cooking Afghan food, and, though his tone is modest, he speaks with remarkable fluency on the linguistic quirks of his character’s dialogue. His own heritage informs this entire process – he’s keenly aware of how he’d feel if this story was an Armenian one, and if so, how he’d like to see Armenians represented.

“I would really, really hope that whoever was playing Armenians [onstage], especially if they were not Armenian, would do a really, really careful and meticulous job of knowing about the culture, the history, the language and portraying it as accurately as they possibly could, with as much knowledge and detail as they possibly can,” Sirakian said.

“So I take that feeling and apply to what I imagine…Hazaras must feel – they’ve never had this chance. And I just felt this huge responsibility. Three months is not nearly enough to learn about this incredibly intricate and fascinating society. But it’s a start, and I did, with the time I had, as much as I could, because I just like I said: as an Armenian, I thought, it’s so important to get this right,” he added.

Sirakian’s training at the Royal Academy of Dramatic Arts has made him a master of disengaging from the play each night – he showers after every performance, and practices transcendental meditation. In general, he tries to separate his work onstage from the outside world, though the two do inevitably bleed into each other.

Sirakian, in working on a play which features a moment of huge political upheaval, “can’t help but make the connection” with the past several months of conflict in Artsakh, and so when he takes to the stage at night, the urgency of the situation in Afghanistan in the 1970s easily transmutes itself to that of Armenia.

For audiences, the story is impossible to shake. Sirakian says he’s floored by the compassion from Afghan audience members who speak to him at the stage door, these people who “have their own share of suffering and hardship – it just shows how connected we are and how well we understand each other.”

Even without noticing the Armenian names on the program, The Kite Runner is still a relevant and crucial work for Armenian audiences to see. While its subject matter is heavy, the play is buoyed and warmed by the masterful tabla drumming by virtuoso performer Salar Nader, whose music takes the form of a heartbeat, setting the tone, pace, and mood of each and every scene. Moments of trauma or violence are bracketed by scenes of joy and celebration, from the exhilarating kite-fighting tournaments to the love story and eventual wedding scene that close the first act. All of these moments, traumatic and joyful, will ring with familiarity to the Armenian cultural experience – the sound of a tabla drum bears a striking resemblance to that of a dumbek, and the plight of an Afghan immigrant in America bears the same painful resemblance to that of an Armenian refugee. Armenian audiences, who never see themselves onstage, should then rush to this show, not only to see a mirror to themselves, but to form a connection and solidarity with another group of people who also hold their culture and history with a fierceness, lest it be attacked once again.

Still, as he leaves this show behind, there are an infinite number of new stories he’s excited to discover, both as a writer and performer. One hopes to see his name in another bright marquee soon enough, wielding the vast power of the arts as his instrument of change.

Worry not – if Eric Sirakian is a guardian of this power, it’s in incredibly safe hands.