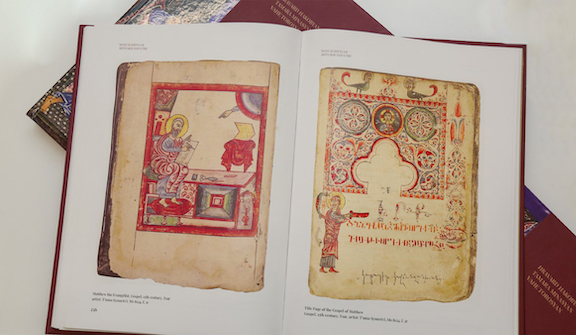 Illustrated pages of "Manuscript Heritage of Artsakh and Utik"

The publication was made possible by a grant from the Lawrence Terzian Fund of the AGBU within the framework of the AGBU Artsakh Research Grants, which aim to raise awareness and enhance knowledge of Artsakh, it’s history, culture, and existing issues. The late Mr. Terzian was a professor of English at New York University, the founder of “Industrial Design” magazine and author of numerous books and over 200 published articles, many of which are about Armenian writers and literature.

The work is an exceptional asset to promote international recognition of the cultural heritage of the two historical provinces of Armenia, Artsakh and Utik. These provinces have long been home to countless theological, historical, educational, and ritual manuscripts, most of which are now preserved at the Matenadaran. The collective efforts of the co-authors prove the centuries-long Armenian presence in these regions.

2. From left: Editor of "Manuscript Heritage of Artsakh and Utik" Dr. Karen Matevosyan with co-authors Tamara Minasyan and Vahe Torosyan

The volume consists of three parts and reflects the history of Artsakh and Utik, presents the scriptoria and educational centers of these regions that operated adjacent to the large monasteries, as well as reveals the iconographic peculiarities of illuminated manuscripts created between the 13th and the 18th centuries. “The ‘Manuscript Heritage of Artsakh and Utik,’ as a harmonious part of the history and cultural heritage of these provinces, is rich in numerous Christian architectural and sculptural monuments, khachkars (cross-stones), and medieval secular buildings, which we must preserve and hand down to generations,” noted the editor of the book, Professor Karen Matevosyan, Doctor of Historical Sciences.

“In the current political and regional developments when the neighboring countries make every effort to falsify the history and present the Armenian cultural heritage as their own, particularly Caucasian Albanian, these scientifically proven revelations can serve as a strong foundation to resist the flow of disinformation,” said co-author Tamara Minasyan. “If their attempts are somewhat successful in ruining our cultural and architectural monuments, it is much more difficult for them to reach our manuscripts. Particularly the manuscript colophons are exceptional sources that unquestionably prove the centuries-long Armenian presence in Artsakh and Utik.”

“Manuscript Heritage of Artsakh and Utik” is one of the 18 projects funded in the framework of the AGBU Artsakh Research Grants established in the aftermath of the 44-day Artsakh War. During a gathering at AGBU Armenia to celebrate the launch of the publication, AGBU Armenia President Vasken Yacoubian elaborated on the AGBU Artsakh Research Grants mission. “The 44-day Artsakh War demonstrated a huge knowledge gap within the international community about the Artsakh history in general and its cultural heritage in particular,” said Yacoubian. “The project aims to penetrate all the spheres of Artsakh’s history to raise awareness about data-driven and unbiased facts. In this regard, Matenadaran, as the main repository of ancient manuscripts and sources, can be one of the key pillars to intensively promote this initiative.”

With dissemination of this content among scholars and wider audiences, AGBU and Matenadaran are helping to prevent the falsification of Armenian history. The publication is already being circulated in Europe. The authors have also participated in various international conferences. “We plan to share the book with all the foreign embassies in Armenia, international cultural institutions, universities abroad, as well as within international scientific circles and centers. We strongly believe that through this publication, the world will uncover the rich cultural heritage of Artsakh and Utik,” noted Director of Matenadaran Dr. Vahan Ter-Ghevondyan.