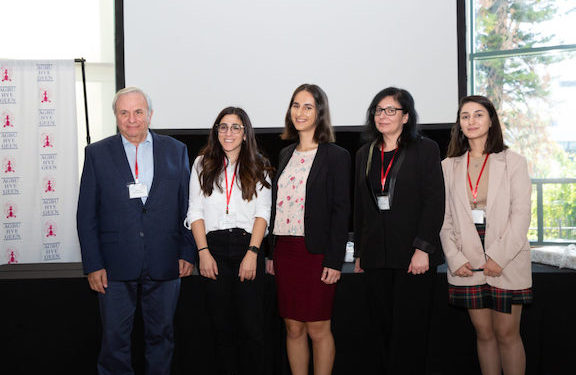 After an interval of two years due to the pandemic, AGBU Hye Geen and Young Circle in partnership with CSUN Armenian Studies have presented a most timely international Conference entitled “Women Journalists at the Forefront of Empowerment.” The presence of an enthusiastic audience was proof of the strategic importance of the subject in view of the integration of Armenian women in the socio-economic fabric of both Armenia and the diaspora.

In his welcoming remarks, Dr. Vahram Shemmassian, director of CSUN Armenian Studies announced that between 3,000 and 4,000 students of Armenian origin attend Northridge University and a “tangible number of non-Armenians enroll in Armenian classes each semester.” Considering the changing role of Armenian women and their community involvement, the University has introduced a new course about the evolution of Armenian women’s role throughout history.

Finally, Dr. Shemmassian asserted that the CSUN Armenian Studies program “works closely with all organizations and institutions set to enrich Armenians in Armenia, Artsakh and the diaspora.”

Then AGBU Hye Geen’s Young Circle member and Conference Chair Nellie Yacoubian cited the three decades-long activities and ongoing projects of AGBU Hye Geen, including the regular publication of a magazine and sustaining a TV program. This was followed by a video presentation about the eight thriving Pregnant Women’s Centers in Armenia and Stepanakert, proof of AGBU Hye Geen’s unwavering support to Armenia and Artsakh. Finally, in keeping with the nation-building strategy of empowering women, she referred to the significance of the Conference theme and introduced the speakers, all active women journalists from Armenia, Artsakh and the diaspora.

Next Liz Ohanesian, an award winning freelance arts and culture journalist based in Los Angeles, emphasized the contribution of diasporan women journalists in raising the level of Armenian visibility.

The first speaker, Alene Tchekmedyian, a former editor of UCLA’s student-run newspaper, has always been intent on telling stories and making the voiceless heard. Whether reporting for the Los Angeles criminal courts or the leading Los Angeles Times newspaper, she has consistently disregarded fake news and diligently investigated cover-ups to present valid testimonials. She has also countered harassments and threats with courage and continued telling stories about all kinds of violence without reservation.

The next speaker, Lillian Avedian, a New York based staff writer for the Armenian Weekly newspaper whose writings are also published in Los Angeles Review of Books and the online journal of Democracy in Exile. A volume of her collected poems is published by the Girls on Key Press. Beside telling stories about diasporan social, political, cultural as well as Armenian identity issues, her studies in Peace and Conflict have fueled her interest in the geopolitics of South Caucasus and the enduring trauma of Artsakh.

Lillian has reported extensively about the Armenian-Azeri confrontation as it affects the daily life of frontline communities. Her stories describe how indiscriminate shelling has affected women, deepening their anxiety and increasing their family obligations toward traumatized children, the disabled and elderly parents. Some have faced the hardship of being displaced and forcibly leaving all possessions behind. Many women also face the daily danger of transporting ammunition. In spite of their heavy burden, women are also tasked to uphold the family morale and those who share their grievances with others are stigmatized for hurting the family dignity.

Lillian stressed that Armenian women journalists continue to tell stories of war-torn lives as crucial evidence of the tremendous human and material costs of the enemy violence.

After lunch break, two short videos were presented. The first was about AGBU Hye Geen’s Pregnant Women’s Centers in Armenia and Artsakh, namely at Vanadzor, Charentsavan, Yerevan’s Arshagouhi Tavitian and at Stepanakert, the Yacoubian Family of Los Angeles and Sepetjian Family Centers, as well as the Tamar Kevonian and Sera Aintablian Centers.

The other video was submitted by Ellina Abovian, a KTLA 5 news channel anchor, who was unable to attend the Conference in person due to a scheduling conflict. She linked the increasing number of Armenian women journalists to the interest aroused by their stories.

The next speaker, Astrig Agopian, a French-Armenian freelance photojournalist and camerawoman had also submitted a video as she had to leave for Ukraine to report on the war. Her work is widely published in French and English media outlets in Paris, London, Beirut and Los Angeles. She is also the co-founder of Namak, an online English weekly newsletter. She has told deeply moving stories about the human toll of war in Artsakh and Ukraine, including the torture and killings of prisoners, as well as the hardship of the civilian population.

Astrig has also written investigative reports for Hetq, gathering evidence about gross violations of human rights admissible in courtrooms. As such, telling stories becomes a political tool and constitutes a means to exercise soft power.

Referring to her war memories, Astrig’s video concludes: “Artsakh gave a new direction to my life, enabled me to use my skills in the service of my Fatherland.” She also stresses the need to empower women journalists to use their memories of war-torn lives to awaken humanity.

The last speaker was the Stepanagerd-born Lika Zakaryan. She had pursued studies in conflict management and peace building methods. Her later studies in civic journalism had led her to join the media outlet CivilNet and finally report on the 44-day Artsakh war.

As the Azeri violence escalated and all members of her family were engaged in the war effort, her urge to be useful led her to keep a diary documenting the memory of the mounting casualties and the displaced of the intractable conflict.

Lika’s coverage of the war has now been compiled into a book entitled “44 Days: Diary from an Invisible War” and a documentary entitled “Invisible Republic” directed by Garin Hovannisian.

Through a woman journalist’s storytelling, an “invisible” war has become visible and hopefully, the memory of the thousands killed will activate a movement to combat men’s inhumanity to men.

In appreciation of their participation, Vania also presented well-deserved gifts to the speakers.

After a brief Question and Answer session, Jane Partizpanian, a journalist student at California State University Northridge, commended the well-organized Conference’s message of empowering women journalists and making their fact-finding stories keep up the momentum for peace and justice.

The concluding remarks were made by Sona Yacoubian, founder and president of AGBU Hye Geen. She began by making the announcement to thunderous applause that the 9th Pregnant Women’s Center was due to open at the strategic city of Pert. She evaluated the Conference theme of empowering women journalists to grow in personal skills and professional mastery as a truly impactful and inspiring message for all times in Armenia and the diaspora.