Ahead of Talks, Ankara Wants Armenian Genocide Issue to be ‘Left to Historians’ 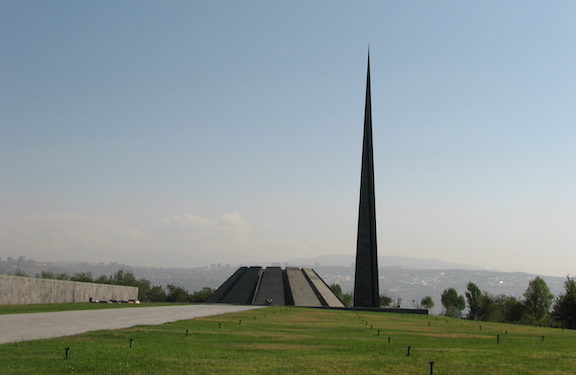 Ankara wants the issue of the Armenian Genocide to be relegated to “historians” and be removed from the agenda of political platforms—legislatures considering adoption of recognition measures—ahead of anticipated talks to begin the process of normalizing relations between Turkey and Armenia.

Yerevan has expressed willingness to engage in such talks without preconditions, but Ankara has already spelled out several points, on which Armenia must agree for talks to move forward.

Omer Celik, the Vice-President of the ruling Justice and Development party (AKP) said that Turkey’s President Recep Tayyip Erdogan has several key views on the normalization talks, among them conditions regarding the Armenian Genocide that include opening of the archives, reported the Anadolou Agency on Thursday.

Celik also said that Erdogan considers Azerbaijan’s approval of the normalization process as a key factor in proceeding with the talks.

“The initiative to normalize relations with Armenia can take place on the condition that Armenia abandons its aggressive and invasive policy against Azerbaijan,” said Celik.

“In addition, the most sensitive point for President Erdogan is that our Azerbaijani brothers and [Azerbaijan president] Mr. [Ilham] Aliyev look positively on the normalization of Turkey’s relations with Armenia,” added Celik.

Erdogan and other Turkish officials have also said that Armenia must recognize Azerbaijan’s territorial integrity, which presupposes Artsakh as part of Azerbaijan, as well as Aliyev’s proposal for the opening of a corridor linking mainland Azerbaijan with Nakhichevan and Turkey through Armenia—the so-called “Zangezur Corridor.”

Speaking to reporters last week, Prime Minister Nikol Pashinyan categorically rejected a “corridor” proposal, by said that Armenia has always said that it is ready to normalize relations with Turkey without preconditions, which means, he said, that the recognition of the Armenian Genocide has never been a precondition for normalization of relations with Turkey and opening of borders. During same press conference on December 24, he added that the Armenian government has clearly stated its position on the issue of the international recognition of the Genocide.

However, before any talks, which Ankara this week signaled will kick off in Moscow, Armenia and Turkey have approved the airlines that will conduct charter flights between Yerevan and Istanbul, a provision articulated last week by Turkey’s foreign minister Mevlut Cavusoglu.

Moscow, once again, welcomed the normalization process and offered its assistance on Thursday.

Speaking to reporters on Thursday. Russian Foreign Ministry spokesperson Maria Zakharova described the appointment of the special envoys for dialogue by Armenia and Turkey as a “reasonable and logical” step, underscoring that Moscow is ready to assume a mediating and organizational role for the contacts between the envoys.

Asked when the flights will be launched, Ananyan said they are awaiting the permit from the Turkish aviation authorities.

Authorities in Ankara announced that the Turkish Pegasus airline would operate flights on the same route.