Aivazyan Explains Resignation While Other Ministry Officials Step Down 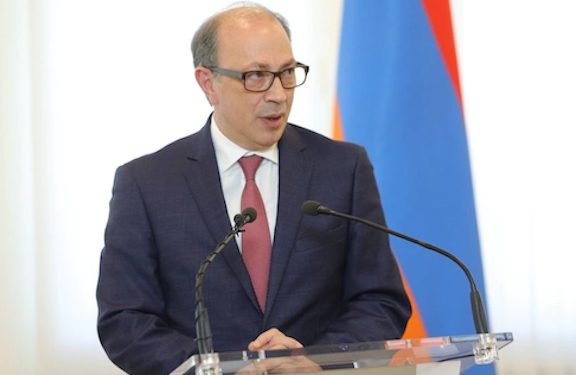 Armenia’s outgoing foreign minister on Monday said his decision to resign from his position stemmed from a belief that Armenia’s diplomats must not be put in a predicament to implement policies that would jeopardize Armenia’s sovereignty and national security. Over the weekend deputy foreign minister Gagik Ghalachyan and ministry spokesperson Anna Naghdalyan also resigned.

Aivazyan submitted his resignation Thursday after a meeting of Armenia’s national security council, during which Acting Prime Minister Nikol Pashinyan proposed the deployment of international monitors along Armenia’s border. He also called for the withdrawal both Armenian and Azerbaijani troops from the border as a means to stem the escalating standoff at the Armenian border, which was breached by Azerbaijani forces on May 12 when they violated Armenia’s sovereignty have advanced their positions entering Armenia’s Gegharkunik and Syunik provinces.

“The reason for my decision to resign was to make sure that there are never any suspicions that this ministry could take any sort of steps or agree to any sort of ideas or initiatives that goes against our statehood and national interests,” Aivazyan said during a farewell address at the foreign ministry on Monday.

“In general, diplomats are perceived as conformist and adaptable individuals keen to avoid conflicts,” Aivazyan said. “I believe that in these difficult times we do not have a right to do that, and I am confident that there will be principled diplomats among us who will become role models for our society.”

While Aivazyan did not elaborate on concrete government policies and decisions that prompted his resignations, Pashinyan went on the defensive in his quick response through his press secretary.

“While we thank Mr. Aivazyan for his service, we believe our national and state interests require Mr. Aivazyan to provide a public explanation about who or how steps were going to be taken that could jeopardize our country’s national or state interests,” Pashinyan’s press secretary Mane Gevogyan told Armenpress on Monday.