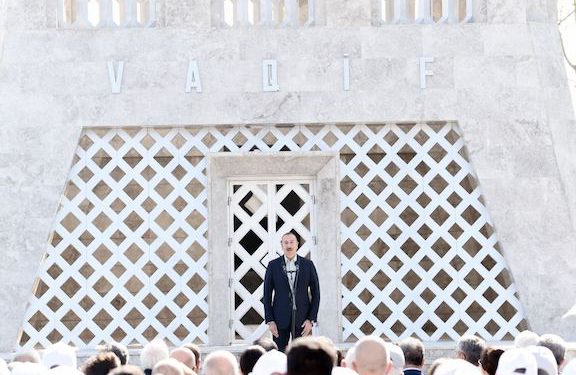 President Ilham Aliyev of Azerbaijan, once again, traveled to occupied Shushi where he continued his threats against Armenians, this time saying that the Nagorno-Karabakh Republic does not exist.

He and his wife, Mehriban Aliyeva, visited Shushi to inaugurate a cultural center dedicated to an Azerbaijani poet.

Aliyev laid out plans for the redevelopment of the occupied Artsakh city, saying that five-star hotels and residential complexes were scheduled to be constructed.

“The hated enemy,” Aliyev said, referring to Armenians, “was building the so-called parliament of the self-styled ‘Nagorno-Karabakh Republic’ there,” Aliyev said. “This was intended to antagonize us. The foundation of that building had already been laid and stonework was already been completed. By my order, this devil’s lair was destroyed.”

Aliyev promised those in attendance that next year the 270th anniversary of the city will be celebrated in Shushi, which he called the “cradle of Azerbaijan.”

In reality, Shushi is an Armenian city whose history spans centuries and was known as the cultural capital of historic Armenia.