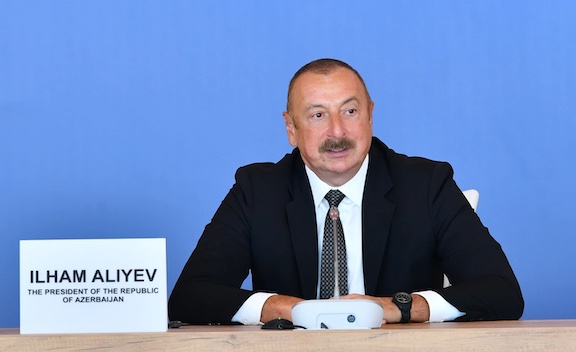 President Ilham Aliyev of Azerbaijan gave a speech on September 21 where he mentioned a few interesting points, which deserve to be clarified. A few of his claims and their answers are discussed below.

First, Aliyev stated that “No one can speak to us with ultimatums and let them [Armenia] not place their hopes on others. I will say once again, no one or nothing can stop us.” Although he claims that Armenia has given them an ultimatum, he is the one who is backing up his claims with threats that “no one or nothing will stop us.”

Aliyev then goes on to claim that “Yerevan is allegedly delaying the border delimitation,” and, “If Armenia wants to accuse us of entering their territory, then there is no justification for that.”

Since May 2021, Azerbaijani forces have occupied a few hundred square kilometers of Armenian land, which, according to the Soviet Staff maps used until 1991, have officially been accepted by Azerbaijan and Armenia. Aliyev is aware that these maps exist in Baku and Yerevan, bearing the signatures of both parties. After all, all the ex-Soviet republics today use these same maps as the basis of their existence.

How can Armenia begin delimitation while Azeri forces are occupying parts of sovereign territory of Armenia? This is nothing but blackmail and a political game that Aliyev is playing in order to enforce new borders, where his soldiers stand today. He plans to annex the territories occupied after 2009, claiming ownership to the occupied lands, which they have forcefully taken no thanks to our CSTO allies.

Unless Azeri forces retreat from sovereign Armenian territories and go back to the Soviet delimited borders, no further talks for delimitation can be initiated.

If Azerbaijan has other borders in mind, they should produce proof for their claims. We are aware that during the past few years Azerbaijan has drawn several maps appropriating Armenian territories, but these cannot be accepted as official maps. These maps were often shown to Armenian border guards as the true border maps of Azerbaijan.

The most ridiculous claim Aliyev made during his speech was the following: “Azerbaijan has brought together maps from the 20th century and other eras demanding that the delimitation processes take place based on those documents.”

The plain truth is that Azerbaijan was created in 1918, and the word “Azerbaijan” cannot be seen on any map drawn prior to 1918. They base their claim only on one map, found in a British atlas of 1844, where the name Azerbaijan appears between Georgia and Armenia. But the publishers of the atlas corrected their mistake on the other maps of the same atlas.

On any map showing this region dating past 1918, the word Azerbaijan does not appear north of the Arax River, while to its south we see the Iranian province of Azerbaijan, whose name was copied by the main founder of this country, Rasulzadeh, in 1918. At the time, Iran complained about this misnomer, but the great powers were busy dividing the oil riches of the Middle East among them and this complaint was not heeded, resulting in the claims Azerbaijani’s make today, to be the rightful owners of Iranian Azerbaijan as well!

In my active years, I have studied thousands of maps depicting this region and would very much like to see Aliyev’s collection of maps that he has brought together. Naturally, these should exclude maps created by Soviet and independent specialists hired by Azerbaijan’s government.

Let us recall Aliyev’s speech in the Azerbaijani National Academy on December 14, 2005, where in front of the international community, addressing Azerbaijani scholars, he suggested they work on articles and monographs, proving the historical absence of Armenians from their territory, while promising large rewards to any scholar who could develop and prove this thesis.

On April 26, 2011, during the General Assembly of the same academy he made the following announcement. “I am pleased that our scientists positively responded to my appeal and created wonderful works on the history of this region based on real facts in a short period of time. Most importantly is the fact that the world community was almost unaware that the present-day Armenian state had been established on historical Azerbaijani lands.”

All this rhetoric, coming from the President of a country born in 1918, but claiming a more historic past, while Armenia exists on the oldest World Map, dating 600 B.C., as well as on the Behistun cuneiform inscriptions in Iran, dating from the same time period.

Here is how the President of a 100 year old country is asserting to be considered as an ancient one!