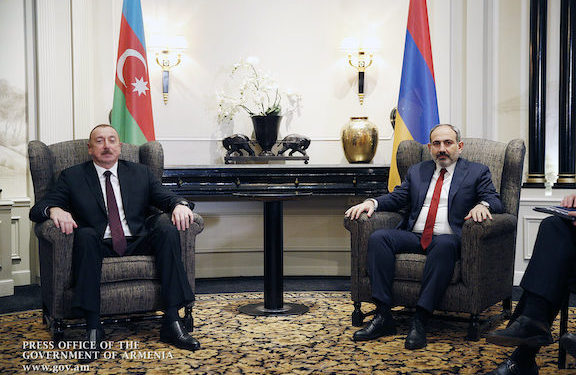 President Ilham Aliyev of Azerbaijan told FRANCE 24 that he would meet with Prime Minister Nikol Pashinyan in a meeting set up by the OSCE Minsk Group Co-chairmen, adding that a meeting between the foreign ministers of Armenia and Azerbaijan was “good indicator” for potential dialogue.

Aliyev said a meeting on Saturday between foreign ministers Ararat Mirzoyan and Jayhun Bayramov indicated that dialogue for a peaceful solution can was possible.

Aliyev, however, insisted that the Karabakh conflict had been “resolved once and for all and there should be no return to the previous situation,” denying that he had territorial claims from Armenia.

The FRANCE 24 interview came days after Aliyev used the pulpit at the United Nations to spread misinformation and a day after he threatened Armenia with war, on the one-year anniversary of its attack on Artsakh.

It is ironic that Aliyev would tout any effort by the OSCE Minsk Group, given his overt attack on the mediating body, which he has claimed was ineffective thus promoting Azerbaijan to attack Artsakh last year to right what he calls a historic wrong.

The agenda Aliyev has been promoting lately was a so-called peace treaty with Armenia, through which Yerevan would completely disavow Artsakh and recognize it as part of Azerbaijan.

Since May, Azerbaijani forces have set up positions on Armenia’s sovereign territories, after breaching the border and amassing what has been reported to be 1,000 soldiers.

Armenia’s Foreign Ministry on Monday accused Azerbaijan of threatening the region’s security through its continued aggressive actions in Armenia and Artsakh against Armenians, saying that Baku deliberately ignored three ceasefire agreements, mediated by the Minsk Group co-chairmen, during the 44-Day War.

“The Azerbaijani authorities not only continue their hostile policy toward the people of Artsakh, but also rename Armenian settlements in the territories that have fallen under their control, destroy and desecrate religious sanctuaries and cultural heritage,” said Armenia’s foreign ministry in a statement on Monday.

“These actions and the complete ethnic cleansing of the Armenian population once again reveal the fact that the guarantee of physical security and the right to life of the Armenians of Artsakh is impossible under the jurisdiction of Azerbaijan,” added the foreign ministry.

“The Trilateral Statement on the ceasefire established on the initiative of the President of Russia on November 9, followed by the entry of Russian peacekeepers into Nagorno-Karabakh, halted the Azerbaijani aggression and created conditions for ensuring the comprehensive security of the population in Artsakh.