ANCA Calls on Congress to Halt Military Aid to Azerbaijan, Expand Aid to Artsakh and Armenia 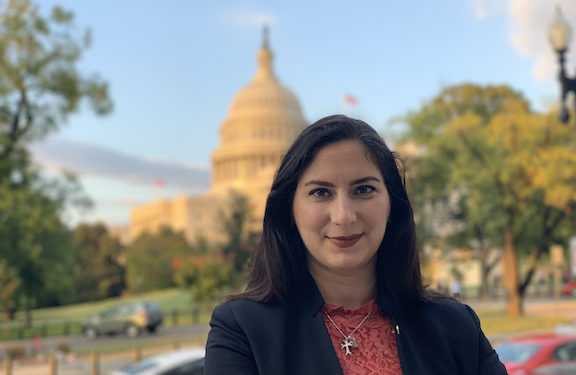 In her testimony, ANCA Government Affairs Director Tereza Yerimyan made the case that, in the wake of Azerbaijan’s ethnic-cleansing of Artsakh (Nagorno Karabakh) and amid Baku’s ongoing occupation of sovereign Armenian territory, the Congress should hold the Aliyev regime accountable by cutting off all U.S. military aid to its armed forces. She also pressed for a long-term developmental investment in Artsakh, to help its families “rebuild their lives and resettle in safety upon their indigenous Armenian homeland.”

Speaking to the need for increased aid to Armenia, Yerimyan prioritized U.S. aid programs aimed at materially strengthening Armenia’s security and sovereignty in the face of escalating Turkish and Azerbaijani threats.

The text of the ANCA’s testimony – submitted to Chairwoman Barbara Lee (D-CA) and Ranking Member Hal Rogers (R-KY) of the House Appropriations Subcommittee on State-Foreign Operations – is provided below.

Similar testimony will also be submitted for Senate consideration.

Thank you, Chairwoman Lee, for your strong leadership of this Subcommittee and your long history of support for the national and democratic aspirations of the Armenian nation.

In the wake of Azerbaijan’s ethnic-cleansing of Artsakh (Nagorno Karabakh), and amid Baku’s ongoing occupation of sovereign Armenian territory, we ask this Subcommittee to hold the Aliyev regime accountable by cutting off all U.S. military aid to its armed forces and to help meet pressing humanitarian and developmental needs in Artsakh with a robust assistance package.

As you know, both Artsakh and Armenia continue to endure the brutal consequences of the unprovoked attack launched on September 27th of 2020 by dictatorial Azerbaijan – backed by its ally Turkey – against democratic Artsakh. USAID has estimated that 90,000 Armenians have been displaced from their ancestral homes, describing their situation as an “acute humanitarian crisis.” Azerbaijan has destroyed countless homes, churches, and hospitals. It has targeted civilians, used prohibited cluster munitions and white phosphorus, illegally detained and abused Armenian prisoners of war, and continues to desecrate Armenian Christian holy sites and cemeteries. Shockingly, Azerbaijan has yet to be held to account.

Neither the Trump nor Biden administrations have investigated Turkey’s role in Azerbaijan’s aggression, including Ankara’s recruitment of jihadist mercenaries from Syria and Libya to fight against Armenians. Nor has either administration investigated reports of Turkish F-16s having been used in Azerbaijan’s attacks. Closer to home, we have yet to see either the Pentagon or Department of State look into potential violations of U.S. arms export laws related to the discovery of U.S. parts and technology in Turkish Bayraktar drones deployed by Azerbaijan against Artsakh.

Aid to Artsakh (Nagorno Karabakh):
Through the leadership of this Subcommittee, since Fiscal Year 1998, direct U.S. aid to Artsakh has provided its peaceful inhabitants with maternal health care, clean drinking water, and life-saving demining by the HALO Trust. In the wake of Azerbaijan’s 2020 attack, this aid program must be meaningfully expanded to meet the humanitarian and development needs confronting the families of Artsakh – estimated at well over $250,000,000 – helping them rebuild their lives and resettle in safety upon their indigenous Armenian homeland. In this spirit we ask the Subcommittee to support a long-term investment in Artsakh, and, in order to meet the most urgent needs facing Artsakh, request the following language to be included in the body of this Act:

Of the funds appropriated under this act making appropriations for the Department of State, foreign operations, and related programs not less than $50,000,000 shall be made available for global health, humanitarian, and stabilization assistance for the Armenian population in Artsakh:

Azerbaijan
We remain troubled that the Administration – even in the wake of Azerbaijan’s attack on Artsakh – has chosen, recklessly and irresponsibly, to waive Section 907 of the FREEDOM Support Act. Compounding this error, the General Accountability Office has confirmed that the Administration has demonstrably failed to meet its statutory reporting obligations under this law.

U.S. military aid to Baku – including Section 333 (Capacity Building), Foreign Military Financing, and International Military Education and Training – should not materially add to Baku’s equipment stores, tactical abilities, and offensive capabilities, or free up its state resources for renewed cross-border action against both Artsakh and Armenia. Moving forward, the Administration should strictly enforce Section 907. Congress, for its part, should rescind the President’s authority to waive this provision of U.S. law, and enact statutory prohibitions on any new U.S. military or security aid to Azerbaijan.

We request the following language to be included in the body of this Act:

No funds appropriated or otherwise made available under this Act may be provided to the Government of Azerbaijan for U.S. military or security programs.

Armenia
Armenia – an ancient Christian nation deeply rooted in Western democratic values – has, despite the crushing economic impact of Turkish and Azerbaijani aggression and blockades, stepped forward as an ally and partner for the United States on a broad array of complex regional challenges. Armenia is a member of NATO’s Partnership for Peace and the Armenian military has been among the highest per capita providers of peacekeepers to U.S.-led deployments, including those in Afghanistan, Iraq, Lebanon, Kosovo, and Mali.

Moving forward, the U.S. aid program to Armenia should focus on Armenia’s security and sovereignty. As such, we request the following language to be included in the body of this Act:

Of the funds appropriated by this Act, not less than $100,000,000 shall be made available for assistance for Armenia to support Armenia’s security and sovereignty in the face of regional threats from Turkey and Azerbaijan.

We commend the Subcommittee’s commitment to American Schools and Hospitals Abroad, and encourage continued support through this program for the American University of Armenia and the Armenian American Wellness Center. We also ask the panel to prioritize supporting Armenia’s role as a regional safe haven for at-risk refugees.

In closing, we would like to underscore, once again, our urgent calls for robust aid to Artsakh and a statutory prohibition on U.S. security or military aid to Azerbaijan.

The ANCA, as always, thanks you for your leadership and looks forward to working with the Subcommittee to help save Artsakh, defend Armenia’s sovereignty, strengthen the U.S.-Armenia alliance, and advance American interests and our shared democratic values.