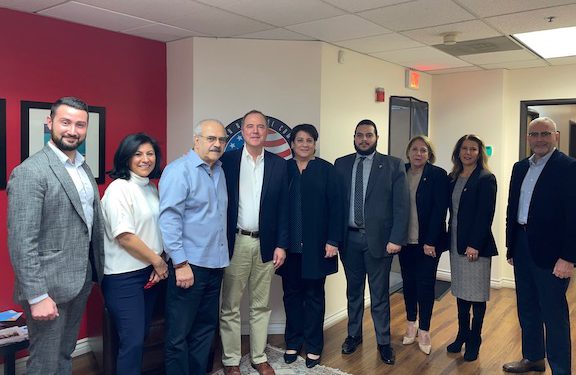 Rep. Adam Schiff with ANCA-WR board and staff members

Armenian National Committee of America-Western Region Board members and staff recently met with Congressman Adam Schiff at the ANCA-WR offices to discuss issues of great importance to the Armenian-American community, including strengthening legislative pathways to hold Azerbaijan accountable for its ongoing aggression against Armenia and Artsakh, its occupation of Armenia’s sovereign territories, and its extensive and deliberate targeting of Armenian civilians in ongoing attacks.

During this conversation, ANCA-WR representatives also highlighted the threat to American democratic processes caused by foreign agents acting on behalf of the governments of Turkey and Azerbaijan, who interfere in legislative efforts to uphold the United States’ foreign policy commitments promoting basic principles of human rights, rule of law, and democracy.

With the Republican Party taking over the US House of Representatives, ANCA-WR emphasized that it is ready to work with incoming lawmakers during the upcoming legislative session to advance several key initiatives spearheaded by Congressman Schiff and also supported by Republican members.

In turn, Congressman Schiff affirmed that Armenian issues are indeed bipartisan issues, and therefore expressed optimism that ANCA-WR advocates should not face significant pushback in the implementation of pro-Armenian policy initiatives due to the change in leadership. The Congressman also committed to ensuring that pro-Armenian legislation receives the attention it deserves, and that he will continue to work with his counterparts in the GOP to ensure that Armenian human rights issues are advanced smoothly in the upcoming session.

“Today and every day, I stand in solidarity with the Armenian community at home, and with the people of Armenia and Artsakh in their fight for peace, freedom, and justice. Support for the community is more important than ever in the wake of the horrific attacks on their ancestral homelands launched by Azerbaijan,” said Schiff.

“In the next Congress, our bipartisan Caucus on Armenian Issues will continue to work tirelessly for legislation that holds Azerbaijan accountable for its ongoing aggression and war crimes against the Armenian people, ceases all U.S. aid to Azerbaijan, demands the immediate return of all Armenian prisoners of war, and supports Armenia and Artsakh’s sovereignty and right to self-determination. We will not rest until the Aliyev regime faces accountability for its warmongering, and the people of Armenia and Artsakh can finally know peace. I look forward to continuing to work with ANCA-WR in accomplishing this vital human rights agenda,” added Schiff.

Since the 44-Day War on Artsakh, Congressman Schiff has redoubled his efforts to bring justice and accountability to Azerbaijan and Turkey for their crimes against Armenia and Artsakh. Ongoing efforts will address the need to enforce Section 907 of the Freedom Support Act, which originally prohibited U.S. military assistance to Azerbaijan in response to its extensive aggression against Armenia and Artsakh in the 1990s, but which has been consistently waived by successive administrations since 2001, when the United States Senate amended the statute to empower the President of the United States to do so. Due to these waivers, Azerbaijan has been given an undue advantage in significantly building up its military capabilities which it has used to commit extensive war crimes and human rights abuses against Armenians in Artsakh and Armenia with further assistance from Turkey.

“For many years, Congressman Schiff has been a steadfast and staunch supporter in Congress on issues of importance to our community and our Cause, and we are truly grateful for his leadership, initiative and genuine friendship. The ANCA-WR is proud to continue its work with Congressman Schiff and his colleagues,” said Nora Hovsepian, Esq., Chair of the ANCA-WR Board, “and now, more than ever, we must step up our efforts to educate legislators on both sides of the aisle to enact common-sense measures which prevent Azerbaijan’s continued abuse of US security assistance to threaten genocide against the Armenian people.”

The Armenian National Committee of America-Western Region is the largest and most influential Armenian-American grassroots advocacy organization in the Western United States. Working in coordination with a network of offices, chapters, and supporters throughout the Western United States and affiliated organizations around the country, the ANCA-WR advances the concerns of the Armenian American community on a broad range of issues.