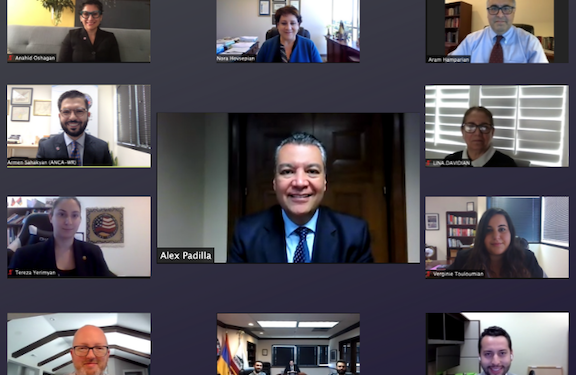 ANCA-WR Board and staff meet with Senator Alex Padilla

The ANCA Western Region Board of Directors held a productive meeting with the junior United States Senator from California Alex Padilla on Wednesday to discuss a wide spectrum of Armenian-American policy priorities. Some of the issues discussed included the strict enforcement of Section 907 of the FREEDOM Support Act and deepening the U.S.-Armenia strategic partnership.

“As part of our mission of cultivating and maintaining productive working relations with elected officials across all levels of government, the ANCA-WR Board of Directors was pleased to hold an extensive meeting with a longstanding ally and supporter of our community Senator Alex Padilla,” remarked ANCA-WR Chair Nora Hovsepian, Esq. “Our relations with Senator Padilla go back many years and we are thankful for his continuous steadfast support on a wide range of issues of concern to our community.”

Earlier in December 2020, the ANCA-WR extended its congratulations to then-Secretary of State Alex Padilla on the occasion of his appointment to replace Vice President Kamala Harris in the United States Senate.

Even prior to becoming the youngest person and first Latino elected as President of the Los Angeles City Council in 2001, Secretary Padilla demonstrated his understanding of our community and a commitment to addressing the specific needs of California’s Armenian-American residents. Following seven years of service in the City Council, Padilla was elected to the California State Senate in 2006 and reelected in 2010. In 2014, the ANCA-WR endorsed his candidacy for the office of CA Secretary of State, where he served as the chief election officer for the state. Throughout his tenure of public service, for over two decades, Padilla always made himself and the resources of his offices accessible to the ANCA-WR and its constituency.

Padilla was a featured speaker at the 2019 ANCA-WR Grassroots Conference. The ANCA Western Region Board has held several one-on-one meetings with him throughout his years in public office and looks forward to maintaining the same friendly and productive relationship with him as a US Senator.