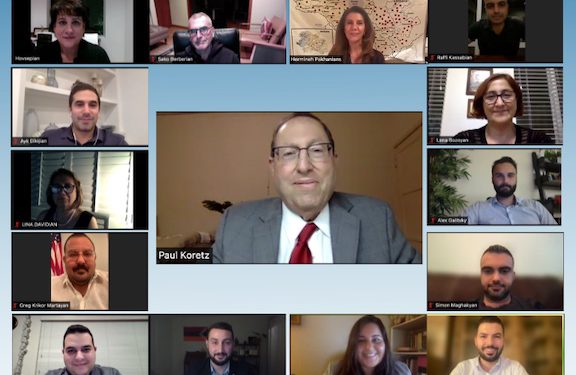 The Armenian National Committee of America–Western Region has endorsed Councilmember Paul Koretz for Los Angeles City Controller. The endorsement followed a virtual meeting between Koretz and the ANCA Western Region Board of Directors.

The City Controller is the elected paymaster, auditor, and chief accounting officer for the city of Los Angeles. The mandated functions of the Controller are divided amongst three divisions: Audit Services, Accounting Operations, and Financial Reporting and Analysis – in addition to Executive Office and Management Services leadership and staff.

“As a longtime friend and staunch ally of the Armenian community in Los Angeles for many decades, the ANCA-WR is proud to endorse Paul Koretz for LA City Controller,” remarked ANCA-WR Chair Nora Hovsepian, Esq. “Councilmember Koretz has a proven track record in public service and we’re confident that upon getting elected he will institute policies and reform for the betterment of all Angelenos.”

“I am honored to have the endorsement of the Armenian National Committee of America Western Region, an organization that has stood with me, and I them, for decades,” said Councilmember Koretz. “The Armenian Cause is near and dear to my heart, as such we will continue to persevere and win victories together. The Armenian community is part of the fabric that makes the City Los Angeles so great, through a rich culture, language, education and arts.  Thank you to my Armenian brothers and sisters in Los Angeles for continuing to stand with me.”

Every year on April 24, Councilmember Koretz has marched and protested with the Armenian community as well as assisted with all the logistical needs, such as securing permits, street closures as well as allocating discretionary funds to ensure the safety of protesters.

He has made other sizable allocations from discretionary funds to finance the installation of the speed feedback signs for Ferrahian Armenian School, security grants for the Holy Martyrs Armenian Church, and many other improvement initiatives for the overall wellbeing of the Armenian community in his district.

During last year’s devastating 44-Day War waged against Artsakh and Armenia by the Turkish-Azerbaijani tandem, Councilmember Koretz was one of the first government officials in the State of California to denounce the attack and issue a statement condemning Azerbaijan’s government.

He was also outspoken during the arson and shooting that took place in San Francisco at the St. Gregory Church and School in September of 2020, ensuring that LAPD deployed resources to all Armenian houses of worship and schools for additional protection.

These examples — among many others — demonstrate Councilmember Koretz’s dedication to the Armenian community and to public service at large, and for these reasons, the ANCA Western Region wholeheartedly endorses his candidacy for LA City Controller.

The Armenian Legacy at UC Berkeley