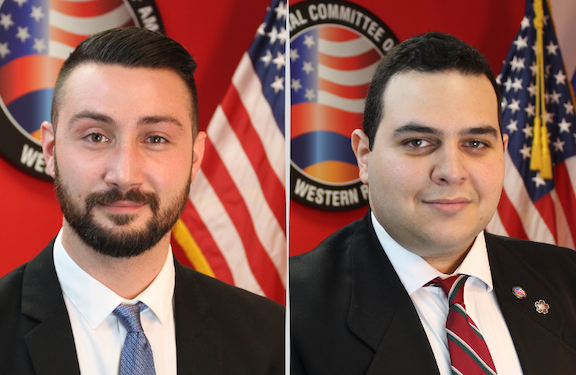 The Armenian National Committee of America–Western Region Board of Directors has announced the appointment of Ruben D. Karapetian and Edward A. Barsoumian as its new Government Affairs Coordinators.

“We are excited to welcome Edward Barsoumian and Ruben Karapetian to our Government Affairs team,” remarked ANCA-WR Chair Nora Hovsepian, Esq. “Having two qualified staff members exclusively dedicated to government relations will undoubtedly contribute to our advocacy efforts throughout the western U.S., especially during this critical moment for our community and nation.”

The ANCA-WR Government Affairs Coordinators will be in charge of executing the organization’s legislative strategy, further cultivating strong working relationships with elected officials and their offices to effectively advance policy priorities of the Armenian-American community on all levels of government.

“It is with great honor and pleasure that I accept the duties entrusted to me by the ANCA-WR Board of Directors, to work diligently alongside our capable team in service to the Armenian Cause and our people,” said Edward Barsoumian. “With this opportunity, I pledge to tirelessly carry on the mission laid out by generations of Armenian advocates before us on our righteous pursuit to give voice, justice, equality, and peace to Armenians everywhere.”

“At these unprecedented times, it is vital that the Armenian-American community engages in the political process and ensures that our voices are heard. Politics is not a hobby for me, or for most Armenians,” Ruben Karapetian noted. “However, the ANCA’s decades of advocacy and leadership have laid the groundwork for our community’s involvement. I am absolutely honored to join the ANCA-WR, fully realizing how far we’ve come as a community and noting that there is much more work to be done.”

Karapetian holds a B.A. in Political Science with a focus on Comparative Politics, obtained from the University of California, Berkeley. His primary areas of study were Eastern Europe, East Asia, and American Foreign Policy. Previously he had been an intern and research associate with the ANCA-WR analyzing and indexing global atrocity crimes and genocide.

Karapetian soon after participated in the ANCA’s Hovig Apo Saghdejian Capital Gateway Fellowship Program. Before his university studies, he worked on various film and multimedia projects in Burbank.