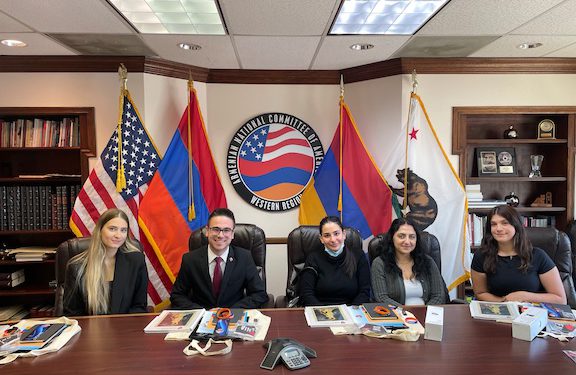 The Armenian National Committee of America-Western Region welcomed this summer’s interns who are determined to mark their place in the Armenian Cause. With six students and recent graduates coming from various academic backgrounds, they will be exposed to the organizational inner workings and gain skills that will serve crucial to their Armenian American advocacy efforts. Throughout the journey, interns will also connect with several professionals who will provide great mentorship and quality lectures on their specific fields of expertise.

With the 2022 Midterm Elections around the corner, the interns will have a unique opportunity to develop projects that showcase their talents and inspire civic engagement to support pro-Armenian policies. Different areas of focus also include government affairs, community outreach, education, and media relations.

Maria Akhverdyan is a second-year student at UCLA majoring in Political Science. She has immersed herself in governmental proceedings at a local and national level with the objective of enforcing positive change throughout a larger scope. Maria will continue her education by attending law school, and later pursuing a career as an attorney. She hopes to continue implementing change in the political field through multi-faceted means that will become the building blocks and a precedent for greater change.

“If I am asked where is the place on the earth that one can come across many miracles, I would name Armenia. Involuntarily you are surprised in such a small place on the earth it is possible to meet such monuments and such people, who can be the ornaments and pride of the whole world.” – Rockwell Kent

Mary Bejanyan is excited to work for the ANCA-WR this summer. Since she had already participated in the ANCA Summer Academy in DC last year, she wanted to further her contributions to Hye Tahd by completing the ANCA-WR internship and taking local and statewide steps in order to benefit the Armenian Cause.

“It was in Armenia that the flood first abated, and the dove alighted.” -Lord Byron

Sarah Kibarian is a junior studying Economics and Philosophy at Pepperdine University. She plans to earn her Ph.D. in economics and apply her knowledge of economics and finance to drafting public policy. She is passionate about social change, funding education, and improving the lives and circumstances of Armenians in Armenia.

“To serve Armenia is to serve civilization” – William E. Gladstone

Mary Kouyumjian graduated from UCLA this year with a bachelors in Political Science. She plans on going to law school to study international law and human rights. She joined ANCA-WR to explore opportunities diaspora Armenians have to help Armenia and expand on her current knowledge of the political situation in Armenia. In her free time, she enjoys listening to music, painting, drawing, and watching movies.

“It is simply in the nature of Armenian to study, to learn, to question, to speculate, to discover, to invent, to revise, to restore, to preserve, to make, and to give.” – William Saroyan

Tony Ordoukhanian currently attends Pasadena City College. He is majoring in Political Science and serves as the President of the school’s Armenian Students Association. His favorite hobbies are reading books, watching movies or TV shows, doing photography, and playing ping pong with friends! His experience in public service and political activism have continued to grow over the years, especially while interning at ANCA-WR. After participating in last year’s ANCA Inaugural Summer Academy, he was deeply motivated to find his unique role in Armenian American advocacy.

This summer, he hopes to accomplish goals that will greatly contribute to advancing the Armenian-American Cause. By focusing on youth engagement projects and lobbying for pro-Armenian policies, he believes in bridging the gap between Armenian Americans and the greater community. A valuable lesson he was taught in Washington, DC was to never leave an ounce of potential on the table. Democracy is no spectator sport as we’re all merely specimens to this great experiment. Thus, he promises to commit every ounce of passion in order to educate the American public, motivate rising youth, and activate new solutions to achieve victory in a shared cause.

Christina Sorfazian recently graduated from UCLA with a degree in Sociology and is currently on a pre-law track. She has been actively involved in various organizations and was on the board of the Armenian Pre-Law Student Association for the last two years. She is excited to be an intern at the ANCA-WR, and looks forward to the many projects that she will be working on during her tenure with the organization. In the future, she hopes to utilize her law degree to wage the legal battles of the Armenian Cause, whether that be advocating for genocide victims or through service in public office.

“The eyes of the Armenians speak long before the lips move and long after they cease to.” – Arshille Gorky

The ANCA Western Region Internship Program was established in 2006 in order to select students who aspire to advance the Armenian Cause through American politics, youth engagement, and project development. The 2022 Summer Session began in June; interested students can find more information on their website.