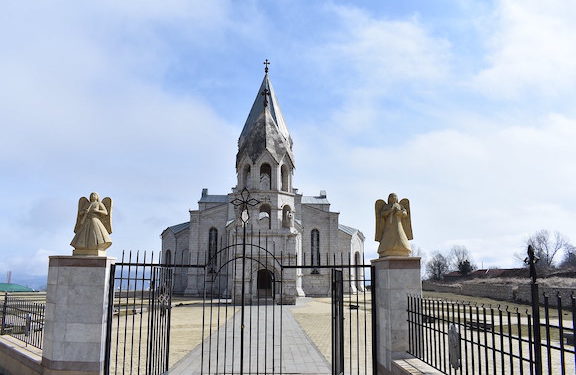 The angel statues on the gates to Ghazachetsots Cathedral

Videos posted on Azerbaijani social media platforms show that the statues of angels that adorned the gate of the entrance to Gazanchetsots Cathedral in Shushi have been destroyed, while the gates have also been removed.

Azerbaijani forces have continued to destroy Armenian cultural and religious sites since a portion of Artsakh territories fell under Azeri control as a result of the November 9 agreement. Shushi was one the many regions that was surrendered to Azerbaijan.

Azerbaijani forces bombed the Ghazachetsots Cathedral in October several times during their aggressive attack on Artsakh.

A video posted by Azerbaijani sources showcases another act of #AzerbaijaniVandalism.

Statues of angles on the gates of Ghazanchetsots Cathedral of Shushi were destroyed. The fence around it was taken down as well.

“We have already witnessed precedents of the destruction of Armenian places of worship, monuments, and official statements justifying them. This issue is in the focus of our attention, and our international partners have strongly criticized any attempts to destroy or misappropriate the Armenian historical and cultural heritage,” Aivazyan added.

The foreign minister said the issue is on the agenda of the peace talks, as evidenced by the 2020 OSCE Minsk Group Co-Chairs’ statement of December 3 and April 13. “We work with specialized structures. We cooperate very closely with UNESCO and other structures,” Aivazian said.

He emphasized the importance of raising the issue with the international community. On April 24 the “Heritage in Danger. Artsakh” exhibition opened at Yerevan City Hall in the presence of high-ranking foreign officials, who arrived in Armenia to participate in the events commemorating the 106th anniversary of the Armenian Genocide.