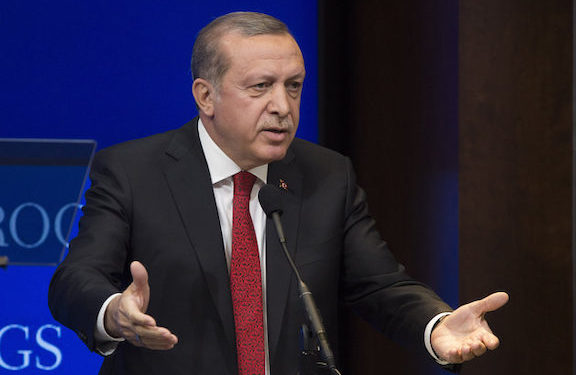 YEREVAN (Azatutyun.am)—Turkey has made more overtures to Armenia, calling on Yerevan to embrace its “offer of peace” to improve historically strained relations between the two neighbors.

Recent developments in the Black Sea and Caucasus region were discussed at a meeting of the Turkish National Security Council chaired by President Recep Tayyip Erdogan on Thursday.

The statement published after the meeting, which lasted for about three hours, in particular, reads: “The need for a speedy settlement of disputes in a peaceful way based on respect for international law and the territorial integrity of countries was emphasized. Besides, the need for Armenia to maintain the ceasefire and take advantage of the peace offer was emphasized.”

In the past Turkey at different levels has already offered “peace” Armenia and also spoke about “positive signals” coming from Yerevan.

The Turkish National Security Council made its statement on the eve of crucial Armenian-Azerbaijani summit talks hosted by Russian President Vladimir Putin in Sochi.

In the days preceding today’s meeting Armenian Prime Minister Nikol Pashinyan reiterated Yerevan’s readiness to engage in a dialogue with Ankara to normalize historically strained relations between the two neighboring countries. He, however, warned Turkey against tying such a rapprochement to the creation of an extraterritorial corridor connecting Azerbaijan to its western Nakhichevan exclave via Armenia.

Unblocking regional economic and transport links is part of the Russian-brokered tripartite agreement that ended an Azerbaijani-Armenian war over Nagorno-Karabakh in November 2020.

Armenia says it objects to providing extraterritorial corridors, but is ready to open transit roads for Azerbaijan, maintaining sovereignty over them.

Earlier this week an Armenian Foreign Ministry spokesman told RFE/RL’s Armenian Service that Yerevan had asked Moscow to act as a go-between in Armenian-Turkish normalization that he said should proceed without preconditions.

During a news briefing in Moscow on Thursday Russian Foreign Ministry spokeswoman Maria Zakharova confirmed such a request from Armenia and said that Moscow was ready to facilitate efforts to repair relations between Yerevan and Ankara.