Another Way or the Highway 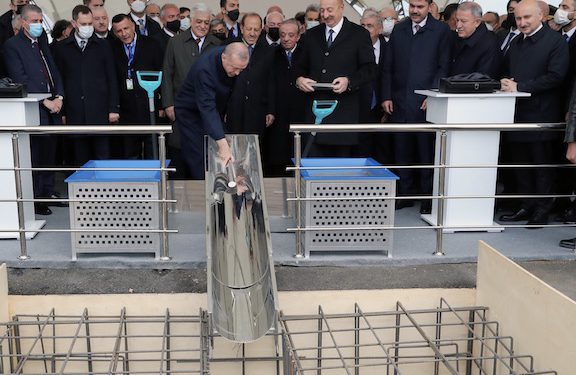 Turkey's President Recep Tayyip Erdogan lays the groundwork for a new highway being constructed on occupied Artsakh territory with his Azerbaijani counterpart Ilham Aliyev cheering on.

Last week, a traumatized global Armenian nation was treated to the latest in a set of perverted images that should finally cause us to collectively wake up, throw up and stand up.

It featured the presidents of genocidal Turkey and Azerbaijan, Recep Tayyip Erdogan and Ilham Aliyev, laying the foundations of a highway they declared would breach the Republic of Armenia’s borders from their already-occupied territories of the Republic of Artsakh.

Turan reported Erdogan asking Saleh Mammadov of Azerbaijan’s state highway agency: “You are going to the Armenian border, aren’t you? Will you go further?” Mammadov responded: “Yes, we will move to the other side. With God’s help, we will go all the way to Istanbul, to Europe.”

The highway threatened by this display is part of the greater “Zangezur Corridor” that Aliyev says will “unite the entire Turkic world”, sparking unavoidable comparisons to the pan-Turanism (or pan-Turkism) ideology that led the Young Turks to committing the Armenian, Assyrian and Greek Genocides in 1915.

Sadly, Armenians have become accustomed to the realization of this sort of expansionist rhetoric since then, when much of historical Armenia was occupied by the Ottomans. We were reminded again last year, when Azerbaijan attacked Artsakh with the help of big brother Turkey, and subsequently walked away with most of Nagorno Karabakh after ethnically cleansing tens of thousands in the process.

What Turkey and Azerbaijan do is not in the control of Armenians. However, Armenians can control how they wish to mount a defense against such an offensive. Unfortunately though, Armenia seems a global nation that is on a losing streak, a rut that we cannot snap out of.

Arguably the biggest loser of this regrettable series of defeats, especially accounting for his impressive yet populist rise to power rallying against corruption less than four years ago, is Armenia’s Prime Minister Nikol Pashinyan.

In another softball interview given on state television this week, the man who violently threatens his own political opposition continued his comparatively weak-as-wet-lettuce approach to his butchering external enemy.

Pashinyan affirmed that all roadways are being considered by the Armenian Government, including the one that Erdogan and Aliyev celebrated above. Additionally, he danced around every opportunity criticize Azerbaijan, respectfully asking them to stop border skirmishes in order for demarcation and delimitation of borders to start.

He also said that the process that will redraw these borders have nothing to do with the status of the Republic of Artsakh, which would be decided through the separate OSCE Minsk Group process. He also said opening up economic ties with Armenia’s aggressive neighbors, Azerbaijan and Turkey, would also be treated as a separate case, sensationally stating Ankara’s suggested 3+3 framework was acceptable for future cooperation with the genocide-denying dictatorship.

Further, Pashinyan never referred to the Republic of Artsakh by name and said he had a mandate from the Armenian people to sign anything for peace to ensue.

While there have no doubt been many contributors to the biggest capitulation in Armenian history signed one year ago, the “biggest loser” title is based on a series of irrefutable facts:

In saying all of this, and many that have no doubt been forgotten, the only victory Nikol Pashinyan has managed since the war began over a year ago was in the country’s 2021 parliamentary elections, where his party won a reduced majority to govern for a further five years.

While acknowledging that a win is a win, Pashinyan’s reduced majority is not something to be sneezed at. A drop from 70.4 percent in 2018 to 53.95 percent in 2021 is an unprecedented slide in popularity for an Armenian leader.

Considering that since these 2021 polls, Azerbaijan has further embedded itself into Armenian lands, an exodus has begun of citizens leaving for pastures abroad, and Pashinyan’s impotent handling of the Covid-19 pandemic has led the largely unvaccinated nation into another wave of infections and hospitalizations, it would be safe to assume the 53.95 percent has only reduced rather than increased.

While a win is a win, this was a win against opponents led by forces backed by Armenia’s previous two heads of state – Robert Kocharian’s Armenia Alliance and Serzh Sarkisian’s I Have Honour Alliance – which together managed to conjure only 26.33% of the vote despite well-resourced campaigns in an election that only managed to attract the participation of 49.37 percent of eligible voters.

Sadly, when objectively analyzing the electorate since the polls, it would be difficult to make the case that this Opposition has capitalized on Pashinyan’s continuing slide to consolidate their place as a serious alternative leadership for the Armenian people.

This is an Opposition frustrated by their characterization as the “formers” of the country’s corrupt past, but this is a label that has fairly or unfairly stuck. The Opposition is similarly frustrated that years of propaganda – from Soviet times to today – has perceived them as unelectable. The Opposition also feels elections should be less about individuals and more about ideas and ideals, but Armenia’s history – as well as the geopolitical trending of the region – favors identity politics focused around individuals.

Despite the challenges facing the Opposition, a paradigm shift is a necessity. Armenia needs another way or it will be a highway that represents hell for the country’s security and sovereignty.

“Another way” could mean that the current Opposition finds its course to deliver the mass outcry needed to unseat Pashinyan. There have also been some murmurs in Armenia that lend weight to a third way. Ruben Vardanyan, Arman Tatoyan, Abraham Gasparyan and others all have supporters backing them toward greater political ambition.

Whether or not these people, the current Opposition, or others are the ticket to extended freedom for Armenia remains to be seen. What should not be overlooked by “another way” is that populism and individualism will play an integral part to collate the masses. It has only been individuals – Levon, Raffi, Nikol – who have managed to mobilize the masses towards movements that have threatened to shift the status quo.

If, as Putin confirmed, Shushi and Hadrut were never up for bargaining in negotiations before this war, then the sovereign territories of Armenia were most certainly not either. As Azerbaijan and Turkey are openly threatening to build a road in Armenia’s internationally recognized borders, surely a new leadership – one that was not part of the defeats and surrenders of 2020 – will give Armenia the best chance at reaching a more amicable outcome through negotiations. Surely a new leadership will have a better chance at bringing Armenians together to accept what would be that amicable outcome.

This is needed now more than ever. A pro-Armenia, pro-Artsakh, pro-Diaspora, unifying populism. Another way or the highway.

Haig Kayserian is the Executive Director of the Armenian National Committee of Australia.