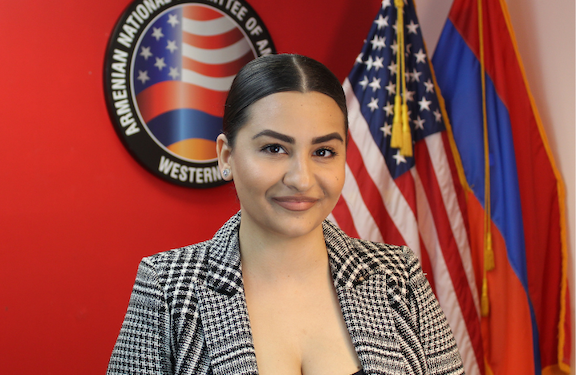 The Armenian National Committee of America–Western Region announced that California native Araksya Nordikyan has been selected as the 2021 Walter & Laurel Karabian Fellow. As an exception due to the ongoing COVID-19 pandemic, this year’s Karabian Fellow will spend 6 months at the ANCA-WR office working on policy initiatives and spend the remaining term of the 9-month program at a government office.

“We are excited to welcome the 2021 Karabian Fellow to the ANCA-WR. Araksya brings a wealth of knowledge, experience, and energy to the organization and we look forward to working with her in advancing the policy priorities of our community” remarked the ANCA-WR Executive Director Armen Sahakyan. “I am certain her tenure at the ANCA-WR office and later placement at a government agency will continue to foster her professional growth, while allowing for the opportunity to work on issues she is passionate about.”

“While there are countless reasons why individuals are dedicated to public service, perhaps nothing is more worthwhile than being a part of something that is greater than yourself,” said Nordikyan. “I am thankful for the opportunity to work alongside ANCA-WR staff and look forward to contributing to the issues impacting the Armenian-American community.”

Araksya Nordikyan is a first-generation immigrant who is motivated by her national and family history, her love for learning and her desire to become an asset to her community. She graduated from the University of Southern California in 2020, earning her Bachelor of Arts in Philosophy, Politics and Law and her Master of Public Administration.

While in college, her ambition and commitment to civil liberties led her to join the Student Senate for California Community Colleges where she served as a voice for students by engaging in policy advocacy. Wanting to learn more about government, Araksya pursued an internship with Councilmember Paul Koretz and was then accepted to the Schaeffer Fellowship in Sacramento where she worked for Assemblymember Reggie Jones-Sawyer. Prior to applying for the Karabian Fellowship, Araksya was the Director of Youth Services for PESA and the liaison for the Los Angeles District Attorney’s JOIN Program, both of which host diversion programs for system-impacted youth to avoid criminal convictions. With her diverse background, academic discipline, and political engagement, Araksya hopes to continue her work on social issues where she feels she can have the most impact in shaping a more inclusive world.

The Walter and Laurel Karabian Fellowship is a nine-month experience that offers young Armenian-Americans the opportunity to enhance their leadership and professional skills. The purpose of this fellowship is to produce professionals in the public policy and political arena.