Aram I Addresses International Forum Ahead of G20 Summit 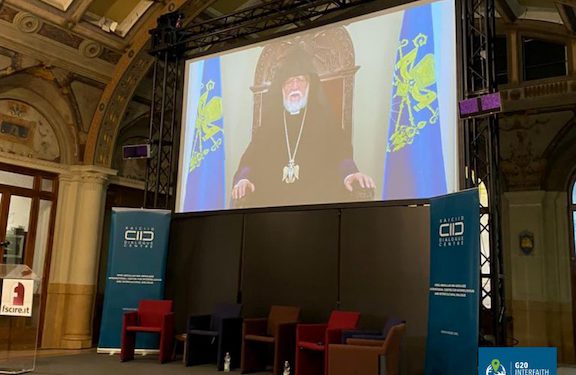 His Holiness Aram I, Catholicos of the Great House of Cilicia was a keynote speaker at a forum in Italy, which took place from September 10 to 14, ahead of the G20 Summit of world leaders.

Speaking to more than 300 high-ranking political, diplomatic, academic and religious leaders from around the world at what is known as the G20 Interfaith Summit, Aram I discussed the role of religion resolving conflicts in the Arab World.

Saying dialogue among various religions can contribute to the establishment of peace in the Middle East, Aram I emphasized that “currently the world is facing immense polarization, and is experiencing tensions and other crisis,” emphasizing the importance of mutual understanding, dialogue and cooperation, “enshrined in moral values and human rights.”

The ongoing socio-economic crisis in Lebanon, as well as the imperative to assist the Armenian community in Lebanon kept the Catholicos from attending the summit in person. His remarks were delivered virtually, at the request of conference organizers.

“The three monotheistic religions—Judaism, Christianity and Islam—can play a key role together, given their common roots, traditions and values,” said Aram I, who added that the religions’ dominant presence in all walks of life in their communities, and their long history of coexistence can become a catalyst for dialogue.

“For some, perhaps, cooperation between monotheistic religions may not seem like a realistic approach, in light of the ongoing unrest in the region,” said the Catholicos. However, he stressed that “the three religions can become a platform for constructive dialogue and the formation of collective approaches to common issues.”

In conclusion, Aram I stressed that monotheistic religions can greatly contribute to justice, as well as the imperative need for peaceful and harmonious coexistence between nations, religions and cultures.