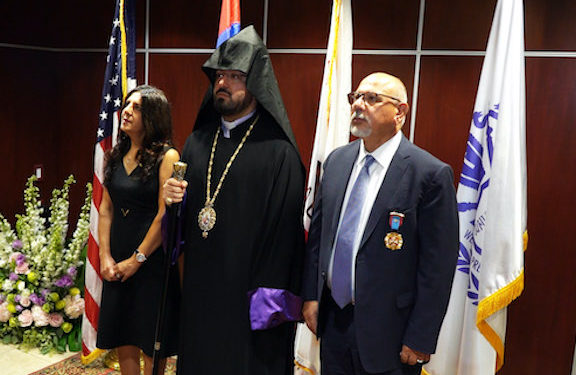 His Holiness Aram I, Catholicos of the Great House of Cilicia bestowed the “Cilician Prince” medal to long-time community activists and benefactors Garo and Sosse Eshgian. The honors were presented by Western Prelate Bishop Torkom Donoyan at a special dinner on Thursday organized by the Prelacy Executive Council.

The program began with welcoming remarks of Religious Council member Archpriest Vicken Vassilian. He announced that per Catholicos Aram I’s decision, Mr. & Mrs. Garo and Sosse Eshgian would receive the “Prince of Cilicia” medal. Archpriest Vassilian then invited the Prelate bless the tables.

In his remarks, Prelacy Executive Council Chair Vahe Hovaguimian highlighted the honorees’ contributions not only to the activities of the Western Prelacy, but also to the Catholicosate of the Holy See of Cilicia, the Church, Armenian Schools, the Armenian Cause, Armenia, Artsakh and the Diaspora.

Ambassador Baibourtian praised the support the Eshgians have shown toward Armenia. He recalled details from the difficult days in Armenia during the 44-day war, and detailed the caring generosity he experienced when working with Garo Eshgian during those trying times. In conclusion he called Eshgian “a great man.”

The Prelate first praised the couple’s spirit of service, and mentioned that the Western Prelacy honors every Armenian who has contributed to the advancement of our community, strengthened their faith in the Armenian Church, as well as shown their unwavering support for the Armenian nation and the Diaspora.

To this end, the Prelate expressed his gratitude to the high-ranking clergymen who took leadership roles in the Western Prelacy and to all the faithful, among them the evenings honorees, and mentioned “Together with the joint decision of the Executive and Religious Councils, we are gathered here today to honor to the Esghians, and remind them that we appreciate you once again for all the support you have rendered. Thanks to which, we also bring our service to our homeland, Church and community. And through the evening’s honorary couple, we also extend our gratitude to all the dedicated people present here tonight.”

The evening reached its climax with the awarding of the highest order of the Catholicosate of the Holy See of Cilicia, the “Prince of Cilicia” medal. Archbishop Yeprem Tabakian read Catholicos Aram I’s Encyclical, following which Very Rev. Fr. Muron Aznikian presented the medal to the Prelate, who bestowed it upon Garo and Sosse Eshgian.

In his acceptance remarks, Garo Eshgian thanked Catholicos Aram I, the Prelate, Archbishop Tabakian, Executive & Religious Councils, the organizing Committee and guests on behalf of his wife and family.

“I share this medal with you,” said Garo Eshgian. “This medal belongs to all my friends and colleagues who have worked with me for years and believed in me, because we cannot accomplish anything alone, but through teamwork we can make the impossible possible.”

The program concluded with a solo vocal performance of “Cilicia” by Anahid Nersisyan.

Over the past decades, Mr. Garo Eshgian has contributed his unwavering service to the prosperity of the life of the Armenians of Los Angeles. He has been Executive Council member, Chairman, as well as a member of the Board of Trustees at St. Mary’s Armenian Church in Glendale, also its Chairman and a National Representative.

Eshgians took on the honor of sponsoring the renovation at the Catholicosate’s Cilicia Museum in Antelias and they still serve the community as public figures, volunteers at the Western Prelacy, and as national benefactors.

Rev. Vassilian, also announced that the Eshgians have pledged $100,000 as sponsors of the Prelate 2022.