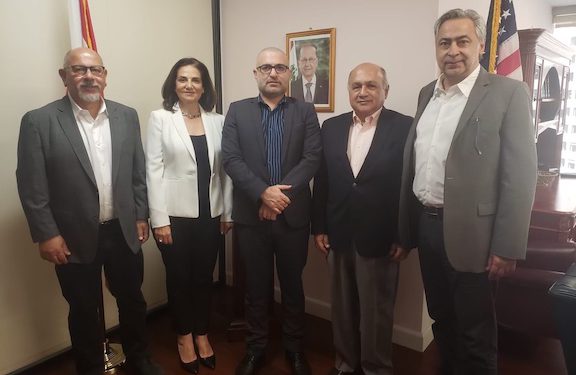 A delegation of the Armenian Revolutionary Federation Western U.S. Central Committee met on Thursday with Lebanon’s Consul General to Los Angeles Bashir Saad Sarkis to discuss issues related to Lebanon, the current economic crisis and future cooperation with the Consulate.

The ARF delegation expressed its wholehearted support for the people of Lebanon as they navigate the difficult economic crisis, compounded by the devastating explosion last year. During this discussion, it was conveyed that as part of the efforts of the ARF Western U.S. Central Committee, the Armenian Cultural Foundation hosted a fund-raising event, during which $200,000 was raised for the Armenian community of Lebanon.

Consul General Sarkis expressed his appreciation for the ARF Western U.S.’s efforts to secure assistance to the Armenians of Lebanon, saying the community there is an important part of the fabric of Lebanon.

Sarkis spoke in length about the upcoming elections in Lebanon and emphasized the importance of the participation of Lebanese citizens, praising past efforts in the Western Region, which saw a great number of Armenians with Lebanese citizenship turn out to vote.

Sarkis was assured that the ARF Western U.S. Central Committee will do its utmost to encourage Lebanese-Armenians to take part in the important elections and expressed willingness to work with the consulate to disseminate information to the community.

The ARF delegation also spoke to Sarkis about the fate of Lebanese-Armenian prisoner of war, Vicken Euljekjian who is being held captive in Azerbaijan, and last month, was sentenced to 20 year in prison following a sham trial in the Azerbaijani court. It was conveyed to Sarkis, that the unconditional release of all Armenian POWs and captives being held in Azerbaijan is a priority for the ARF Western U.S. Central Committee.