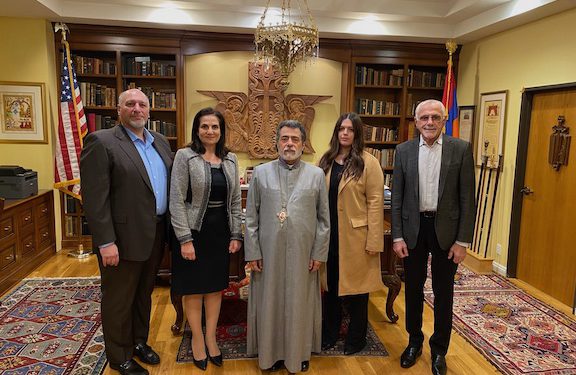 A delegation of the Armenian Revolutionary Federation Western U.S. Central Committee met on November 3 with Western Primate Archbishop Hovnan Derderian at the Western Diocese in Burbank.

The delegation was comprised of ARF Western U.S. Central Committee chair Dr. Carmen Ohanian and members Garo Ispendjian and Alik Ourfalian, as well as Avedik Izmirlian who is the Central Committee’s representative to community organizations.

The Central Committee members briefed Archbishop Derderian on several current projects and discussed ways to advance cooperation with the Western Diocese on matters of mutual interest to the community, the homeland and the Nation.

The sides also praised the unity and cooperation by major Armenian institutions coming together to strengthen and advance the community, such as the Armenian American Museum, the Pan-Armenian Council and other events and programs. To this end, the meeting found that such efforts must increase and pledged to redouble efforts to attract the youth in these initiatives.

The post-war realities and challenges confronting Armenia and Artsakh were also discussed and ways to collectively assist the nation and the important role the Armenian Church plays to that end was highlighted.

The current socio-economic crisis in Lebanon was also on the agenda of the meeting. The Central Committee briefed the Primate about its efforts to raise awareness and funds for the Armenians in Lebanon, citing the recent fundraising event organized by the Armenian Cultural Foundation, during which more than $200,000 was raised for the community in Lebanon.

Archbishop Derderian welcomed the opportunity to strengthen ties with the ARF Western U.S. Central Committee and pledged to continue working with the organization to advance the aspirations of the Armenian community and the Armenian Nation.

Another Way or the Highway