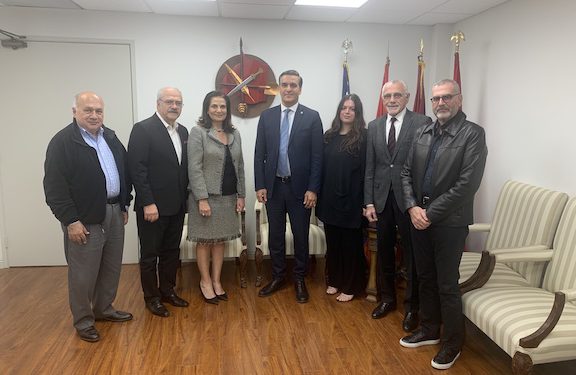 Dr. Tatoyan provided an in-depth briefing of the current situation in Armenia, especially as it relates to how Azerbaijan’s continued aggression impacts the lives of civilians, specifically in the border regions in Armenia’s Gegharkunik and Syunik provinces.

He emphasized that since the war, Azerbaijan has stepped up its anti-Armenian campaign. Through provocations and military attacks, as well as a well-planned domestic disinformation campaign, Azerbaijan continues to pose a direct threat to the lives of Armenian citizens and endangers the stability and security of the region.

Tatoyan emphasized the imperative to inform and educate not only political officials around the world, but also to reach out to international bodies, such as the United Nations, the European Union and others to sensitize them of the massive human rights abuses and violations of international laws and norms.

The Human Rights Defender also particularly highlighted the important role the Armenian Diaspora has and continues to play in the advancement of these important issues. He thanked the Armenian National Committee of America, especially the ANCA-WR, for its unwavering commitment to advancing issues related to human rights concerns. Tatoyan is in the U.S. at the initiation of the ANCA-WR, which honored him with its “Human Rights Champion” Award during the ANCA Grassroots luncheon on Sunday.

The ARF Central Committee welcomed and expressed its unconditional support for the activities of the office of the Human Rights Defender of Armenia, and specifically the role Tatoyan plays in providing accurate and factual information in the face of the ever-changing realities on the ground, highlighting Azerbaijan’s ongoing aggressions against the Armenian people.

The Central Committee pledged to advance the Human Rights Defender’s mission within the community and to bring together all organizations and institutions in support of the Tatoyan’s office and his work at this critical juncture in our homeland’s history.