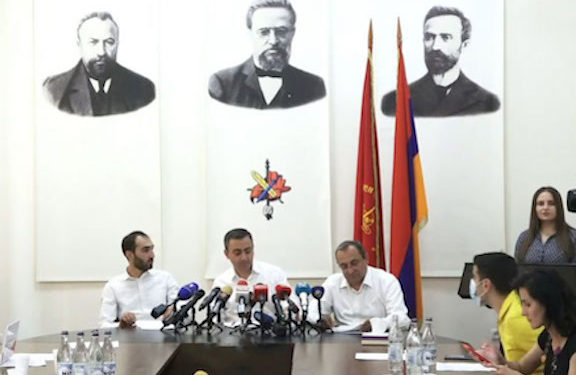 In a statement issued on Monday, the Armenian Revolutionary Federation Supreme Council of Armenia said that the party held a General Assembly over the weekend and elected a new body that will govern its activities for the next two years.

A multi-faceted discussion and analysis was done on the current situation in the country, as well as Armenia’s security concerns, according to the statement, which added that the course of the party’s activities for the upcoming two years was determined by the delegated who attended the meeting.

Saghatelyan was joined by Artsvik Minasyan and Argishti Gevorkyan at a press conference on Tuesday to outline the party’s future plans and discuss the June 20 parliamentary elections, which became the focal point of the event.

Saghatelyan, who is among candidates that ran in the June 20 elections as part of the Armenia Alliance, led by former president Robert Kocharian, said the government was continuing its repressive tactics against those who did not vote for the ruling Civil Contract party, led by acting prime minister Nikol Pashinyan.

The ARF and later the Armenia Alliance called for an Armenia “without Nikol,” referring to the prime minister, whom they blame for the defeat in last fall’s Artsakh war and the resulting crisis that threatens Armenia’s national sovereignty.

Saghatelyan said that government levers are currently being used to pressure elected officials in Armenia’s municipalities who supported the Armenia Alliance during the June vote.
“This is an attempt to destroy the institution of local self-government and make it significant,” Saghatelyan said, adding that the Armenia Alliance is compelling all the data to present to international organizations and will take all necessary steps to protect the rights of those voters who supported they campaign.

The Armenia Alliance called the results of the election into question soon after the preliminary results were announced on June 21. The bloc was one of four political forces that filed separate appeals to the Constitutional Court on Friday calling for the election results to be annulled.

“The crisis in the country has not ended, and every day that this government is in power is destructive for the country, therefore we will continue our fight with complete determination,” added Saghatelyan.
He said that the Armenia Alliance parliamentary bloc will be an “opposition different from all existing opposition forces,” explaining that its decisive struggle will also include street protests and rallies.

“In the Armenian Alliance, you will have a team, which will fight against the authorities using the entire toolkit of the parliamentary opposition,” said Saghatelyan, who added that that they did not share the assessment of international organizations that the elections were held without significant violations.

“It is our opinion that the results of these elections are very dubious and unreliable, that’s why we applied to the Constitutional Court,” explained the ARF leader.

Saghatelyan also announced that they will not be distributing the parliamentary seats until a decision by the Constitutional Court, saying that under no circumstances would the ARF take part in the parliament on its own.

Later last month, Kocharian announced that he would not be exercising his mandate as the first member of the Armenia Alliance slate.

Saghatelyan explained that if the Armenia Alliance chooses to take up its parliamentary mandates, it will provide new impetus to their “fight against the evil government” on a broader scale using the opportunities provided them as members of parliament.