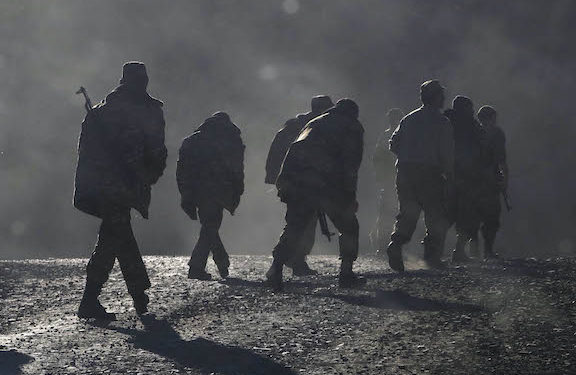 YEREVAN (Azatutyun.am)—Armenia has accused Azerbaijan of executing at least two of its soldiers who were taken prisoner during last week’s heavy fighting on the border between the two states.

Azerbaijani forces reportedly launched large-scale attacks at several sections of the long border on the night from September 12-13, seizing some of the Armenian army posts there. Armenia’s Office of the Human Rights Defender, said on Monday that it identified 16 Armenian prisoners of war in amateur videos of the fighting that appeared on Azerbaijani social media accounts.

One of those soldiers, Davit Gishyan, was recognized by his father, who immediately alerted an Armenian government body dealing international protection of POWs and missing persons. It was quick to ask the European Court of Human Rights (ECHR) to issue an “interim measure” ordering Azerbaijani to guarantee his life and proper treatment.

It emerged afterwards that Gishyan’s dead body is among the remains of 32 Armenian soldiers handed over by the Azerbaijani military to the Armenian side on Saturday.

“It became clear last night that Davit Gishyan was killed in captivity,” Hasmik Samvelyan, a spokeswoman for the government, told RFE/RL’s Armenian Service on Monday.

“Obviously, Azerbaijan bore responsibility for protecting his life,” said Artak Zeynalyan, one of the lawyers representing Armenia in the ECHR. “We have a video showing that [Gishian] was alive under Azerbaijani control. They insulted him and he seemed to have a penetrating wound on his chest.”

“The video has already been sent to relevant commissions of the United Nations and the Council of Europe after undergoing a medical expert analysis,” Kristine Grigoryan, Armenia’s human rights ombudswoman, said on Monday.

“They targeted the female soldier not only because she was a service member and Armenian but also because she was a woman,” Grigoryan told RFE/RL’s Armenian Service. “That instance of exceptional brutality has been properly presented to competent [international] bodies.”