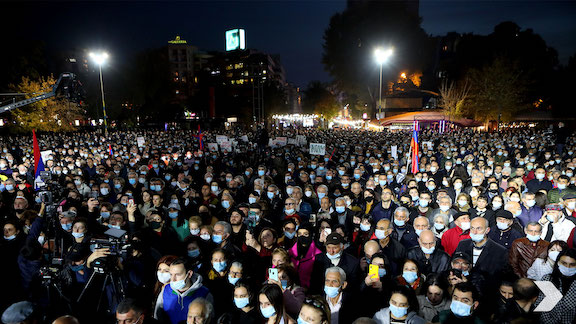 YEREVAN (Azatutyun.am)—Former President Robert Kocharian pledged to topple Armenia’s current government “through barricades or elections” on Monday as his opposition alliance launched what it called a “nationwide resistance” campaign with a rally held in Yerevan.

The rally attended by thousands of supporters of the Hayastan (Armenia) alliance was held on the eve of the first anniversary of a Russian-brokered ceasefire that stopped the war over Nagorno-Karabakh.

Kocharian and his political allies again blamed Prime Minister Nikol Pashinyan for Armenia’s defeat in the six-week war that left at least 3,800 Armenian soldiers dead. They also reiterated their allegations that Pashinian is intent on making more unilateral concessions to Azerbaijan.

Kocharian singled out Yerevan’s readiness to embark on a demarcation of Armenia’s long and contested border with Azerbaijan where tensions are still running high one year after the Karabakh war. He claimed that such a process would amount to Armenian recognition of Azerbaijani sovereignty over Karabakh and a narrow land corridor connecting the disputed territory to Armenia.

The ex-president also accused Pashinyan of breaking his promises to improve living standards, eliminate corruption and create a level playing field for all businesses. Poverty in the country has actually increased under the current government, he said.

“We are going to fight,” Kocharian told the crowd rallying in Yerevan’s Liberty Square. “Rest assured that we will oust them through barricades or elections or in other ways. And I will be with standing with you, leading you on those barricades.”

Kocharian and other speakers at the rally gave no details of their stated push for regime change. Nor did they announce dates for their next demonstrations.

A Hayastan declaration read out at the end of the rally said the “resistance” campaign could “last for a week or months” before achieving its key goal.

“We are starting to get organized,” it said. “Our presence in the National Assembly will serve to strengthen the resistance. As soon as conditions are ripe, we will move our struggle only to the streets and squares.”

Kocharian, who had ruled Armenia from 1998-2008, cautioned on October 4 that the opposition must “generate” greater popular anger at the government before trying to topple it with street protests. “The biggest problem is that a considerable part of our people has come to terms with this situation and voted for these ones,” he said, referring to Pashinyan’s political team.