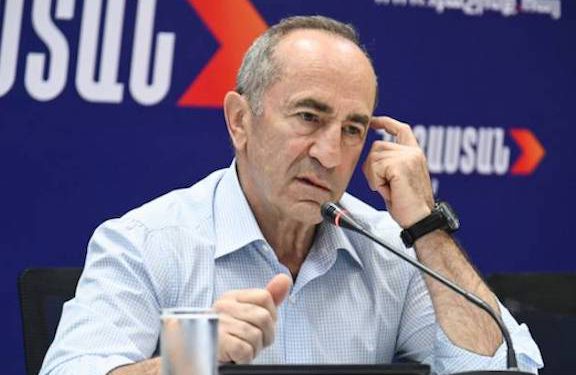 Kocharian Signals that He Might Cede His Parliament Seat

YEREVAN (Azatutyun.am)—Former President Robert Kocharian indicated on Tuesday that his opposition Hayastan (Armenia) alliance will accept the parliament seats won by it in the weekend general elections despite challenging their official results in court.

Kocharian said the bloc, which finished second in the snap elections, will use its presence in Armenia’s new parliament to step up its struggle against Prime Minister Nikol Pashinyan.

“Our struggle will become much more intense. Parliamentary levers will allow us to work much more actively in other directions,” he told a joint news conference with the leaders of the Armenian Revolutionary Federation and Resurgent Armenia parties affiliated with the bloc.

“We will fight against this regime by all possible means, both in and outside the parliament,” said ARF’s Ishkhan Saghatelyan.

According to the Central Election Commission, Pashinyan’s Civil Contract party won almost 54 percent of the vote and retained its two-thirds majority in the National Assembly. Hayastan came in a distant second with 21 percent, followed by former President Serzh Sarkisian’s Pativ Unem bloc, which got 5.2 percent. The 22 other election contenders fared worse and will not be represented in the new parliament.

Civil Contract is expected to control 71 seats in the 107-member parliament, compared with 29 and 7 seats won by Kocharian’s and Sarkisian’s blocs respectively.

Both blocs have rejected the official results as fraudulent, with Hayastan planning to ask Armenia’s Constitutional Court to overturn them. It is not yet clear whether Pativ Unem will also appeal to the court.

Some supporters of the two opposition forces have urged them to refuse to take up their parliament seats in protest.

Kocharian argued against such a boycott, saying that presence in the parliament will give Hayastan “additional and substantial levers” to challenge Pashinyan’s government and eventually cause its downfall.

“You will see in what corruption deals these authorities are mired, especially in state procurements and a number of other spheres,” he said.

The 66-year-old ex-president, who topped his bloc’s list of election candidates, said that he himself will likely cede his parliament seat to another Hayastan member.
“I’m a man of the executive branch. I don’t quite imagine myself in a legislative body,” he explained.

While claiming that the ruling party secured its landslide victory thanks to a widespread abuse of administrative resources and other “mass irregularities,” Kocharian described the official results as “unexpected.”

He admitted that many Armenians voted for Pashinyan because they did not want their former rulers to return to power. In that regard, he complained that he and his political allies did not have enough time to campaign in villages across the country where Civil Contract secured the highest percentage of votes.

Pashinyan and his allies celebrated their victory with a rally held in Yerevan late on Monday. Addressing supporters, the prime minister declared the end of a serious political crisis sparked last November by Armenia’s defeat in the war with Azerbaijan.

Citing the “extremely serious” post-war challenges facing his country, Pashinyan said he and his political opponents must end personal insults and tone down “unnecessary aggression and feud.” He expressed readiness to embark on a “dialogue” with opposition forces.

But in a clear reference to the two ex-presidents, he went on to state that they must “immediately” negotiate with his administration on “returning what was stolen from the people” or risk a crackdown by law-enforcement authorities.

Kocharian construed this statement as a clear sign that the reelected premier has no intention to change his confrontational policies and attitudes towards the opposition. The political crisis in the country is therefore not over, he said.

“If they carry on with the same style, the same vendettas and keep up the internal political tensions, then I have no doubts that Armenia will face yet another pre-term election, and it will not take long,” added the Hayastan leader.

During the 12-day election campaign Pashinyan pledged to “purge” the state bureaucracy and wage “political vendettas” against local government officials supporting the opposition. He repeatedly brandished a hammer meant to symbolize a popular “steel mandate” which he said he needs in order to continue ruling Armenia with a more firm hand. The Armenian human rights ombudsman, Arman Tatoyan, denounced that campaign rhetoric.