Armenia-Azerbaijan Peace Treaty Must be Based on CIS Agreement, Says Lavrov 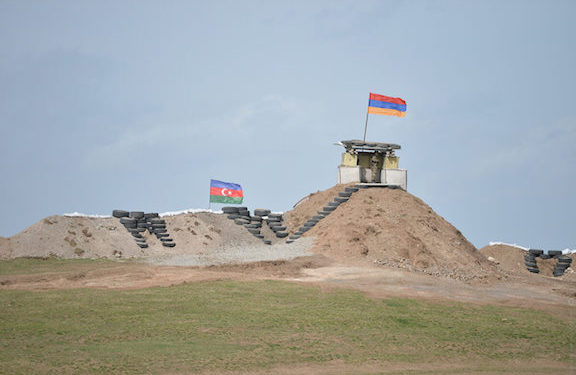 Russian Foreign Minister Sergei Lavrov on Monday suggested that a future peace treaty between Armenia and Azerbaijan must be based on an agreement, which established the Commonwealth of Independent States after the fall of the Soviet Union.

The referenced agreement was signed in 1991 in Alma Ata, as the the capital of Kazakhstan was known back then. Lavrov said that both Yerevan and Baku had agreed to base the proposed peace treaty on that agreement, as well as the United Nations Charter.

During a press conference with his Azerbaijani counterpart, Jeyhum Bayramov, in Moscow on Monday, Lavrov said that Russia had submitted its proposals on a peace treaty in the beginning of the year, adding that both Baku nor Yerevan had made positive overtures toward it.

“We are ready to provide support, as before, but here it is very important to decide on the main principles. To this end, what has been agreed between by the leaders of Azerbaijan and Armenia in Prague on October 6, is, of course, very important as they have confirmed their determination to solve all issues based on the UN Charter and the Alma-Ata Declaration of December 1991,” said Lavrov.

He reaffirmed Russia’s interest in facilitating the signing of the peace treaty between Armenia and Azerbaijan.

“An important topic is the course of the implementation of the trilateral agreements achieved by the Azerbaijani, Armenian and Russian leaders in November 2020, in January and November 2021, and then in late October there was another summit in Sochi,” Lavrov said.

“We are interested in facilitating in every possible way the unblocking of transport links, the delimitation of the border, the conclusion of a peace treaty, and in general the strengthening of confidence-building measures, including through the development of contacts between social institutions, political scientists and parliamentarians,” Lavrov added, according to the Tass news agency.

Lavrov also brought up the so-called “3+3” format, which is a scheme introduced by Ankara and backed by Moscow that envisions an alliance and open borders between Armenia, Azerbaijan, Georgia, Russia, Turkey and Iran. This effort has already been rejected by Tbilisi.

The Russian minister said that efforts are underway to convene a meeting of representatives of those countries.

“We are now preparing the next meeting and are trying to bring together concrete timeframes and agenda,” Lavrov said.

The first “3+3” meeting, attended by the countries’ foreign minister, took place in Moscow in 2021. Georgia did not participate in that forum.