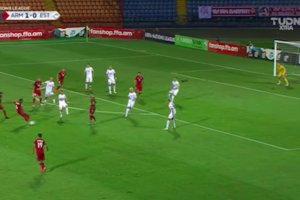 Armenia’s national soccer team beat Estonia 2 to 0 in the 2nd round of the European League of Nations  Division C matchup, which was played on Tuesday at the Vazgen Sargsyan Republican stadium in Yerevan.

Alexandre Karapetyan scored the first goal in the 43rd minute with a left-footed shot from the center of the box to the bottom right corner.

Wbeymar Angulo Mosquera sealed the victory 20 minutes into the second half with a right-footed shot from outside the box to the center of the goal.

“I congratulated our guys on the victory. Everyone played well. We have a very good team. We entered the field with only thoughts of victory. Now the team must prepare for the next game. The match is 90 minutes and it consists of different stages. I think that our team played balanced football in both halves,” Caparrós said after the match.

He also spoke about soccer player Vahan Bichakhchyan’s debut performance saying “The substitute players have upgraded our game. We can say that they entered the game well. Vahan is a talented guy and has a great future. Football players like him are the future of Armenian football.”